We Finally Have Engine Details For The New 2020 C8 Corvette

News has leaked from credible sources that the C8 Z06 Corvette will be fitted with a flat-plane-crank V-8 engine that will take the Corvette to all new heights. The 32-valve flat-plane-crank V-8 has been in the works within GM for nearly a decade. Word on the street is that the crank V-8 will finally be placed in the C8 Z06 Corvette. Years of anticipation look to finally be over. To be clear, this is an entirely new engine inspired by the Wagnerian exhaust systems found on competitors such as Ferrari and McLaren.

The new Corvette engine is expected to be 5.5 liters in displacement. It will also have a firing order that resembles other Italian and British supercars, which is hopes to leave in the dust. There is even speculation that the Corvette Z06 will be as loud on the streets as its rivals. Nothing like raw American horsepower to wake up the neighborhood!

After all, the crank V-8 engine will rev to 8,600 rpm and is expected to produce more than 600 horsepower. This engine will help the Z06 return to its origins as a lightweight, high-revving, rear-drive, track-focused car. Its design features a wider body than the standard Corvette Stingray in order to cover its wider wheels and tires.

Also impressive is the front suspension that can automatically adjust ride height with speed to move the center of pressure and increase downforce for optimum handling. It will probably be the quickest C8 on test tracks ever. We can’t wait to witness the power and performance that comes from the flat-plane-crank V-8 engine in real time.

A hybrid version of the C8 is in the works, rumored to be called the Zora.”It will apparently have a powerful electric motor where the front trunk is typically located. Total system power is expected to approach 1,000 horsepower for brief periods. The resulting all-wheel drive and low-end torque will launch the Corvette like a bullet. The hybrid version could end up as one of the quickest-accelerating cars ever.

Don’t want to get too carried away thinking about the future hybrid model though. For now, we’ll content ourselves with the news that the flat-plank-V-8 engine is finally a reality after years in development. Thank you, General Motors. Thank you! 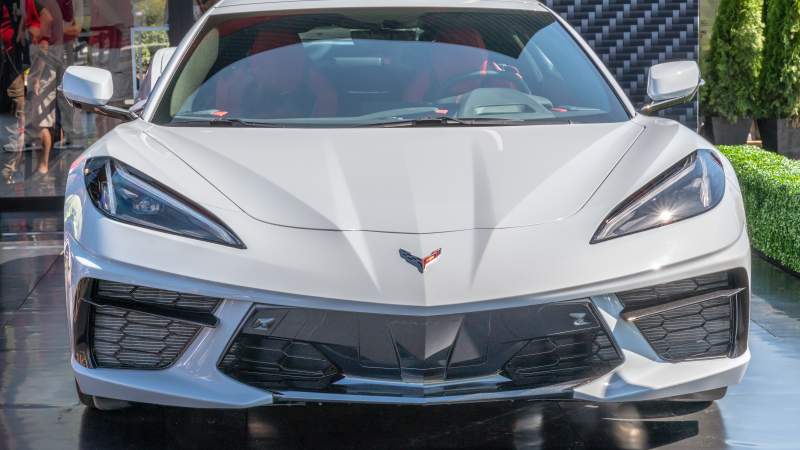