The New Ford Bronco: What We Know So Far

Ford has finally unveiled its latest Bronco. It’s a new redesign of the classic SUV that was one of the top-selling vehicles in its class when it first debuted back in 1966.

Ford is so confident about the success of the new Bronco that they have launched an entire family of the Bronco. It includes a sport version and retro-styled two- and four-door versions that share the same chassis as Ford Ranger. The company is also producing a smaller, less angular model built off a rugged version of its Escape crossover vehicle. With a full lineup of Broncos, Ford is clearly aiming to take back market share from Jeep and similar competitors.

Ford also hinted that there could be a hybrid or fully electric model of the iconic Bronco in the future. That would come as little surprise, considering Ford’s $11.5 billion investment in electric propulsion. Plus, there will soon be an electric version of the rival Jeep Wrangler. Ford needs to stay competitive, after all.

The new Broncos will offer either a 2.3-liter turbo package (making 270 horsepower) or a 2.7-liter turbo engine that produces up to 310 horsepower. The smaller, lighter Bronco Sport will deliver the choice of a 181-horsepower inline-four engine or a 2.0-liter package rated at 250 horsepower. In short, you’ll have plenty of choice.

All three Bronco models come with all-wheel-drive, as will all future Broncos. It’s something Ford execs hope will help the brand stand out from competitors like Jeep and Land Rover. Additionally, Ford touts all Broncos as being able to effortlessly traverse through snow and ice, or clawing over beach ball sized rocks. All three model also can drive through two feet of water, according to the automaker.

Ford says the ability to handle tough off-road conditions is due to “GOAT mode.” A turn of a dial instantly adjusts the Bronco’s settings, optimizing the throttle, transmission, and electronic systems. This mode will maximize grip and handling, no matter what road conditions you’re facing.

A Great “On-Road” SUV Too

Unlike the original Bronco, Ford claims that the new model will be equally at home on the pavement. All three models feature the latest infotainment and safety technologies, including advanced driver assistance systems like forward collision warning with automatic emergency braking.

Ford also plans to have at least 200 different accessories available for the new Bronco. You’ll be able to mix and match your Bronco options, giving each one a truly unique feel. There are also seven different trimlines available. That means there are literally thousands of different configurations for your Bronco.

Ford said the Bronco Sport will reach dealer showrooms later this year. However, the bigger two- and four-door models won’t arrive until the first half of 2021.

Ford has already begun taking deposits to reserve a new Bronco. While pricing has yet to be announced, the Sport edition is expected to start around $30,000. The bigger versions of the Bronco, when well-equipped, will likely be priced above $40,000. The top end trims, along with some optional packages, could push the price tag above $60,000. For an even more detailed breakdown, you can check out this excellent Jalopnik article. 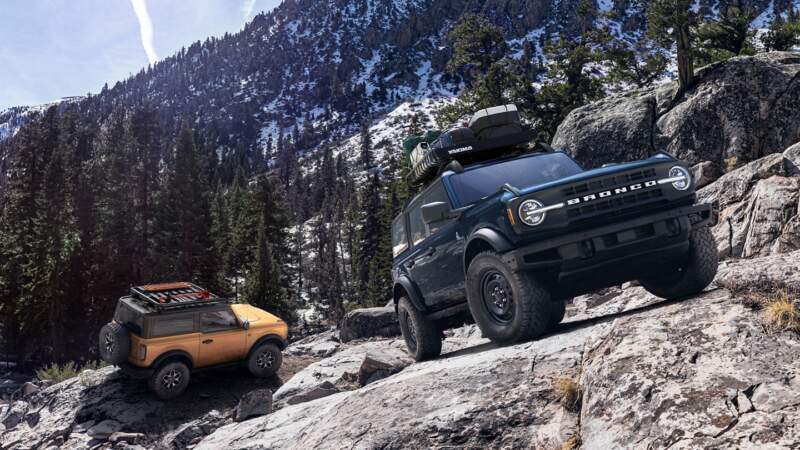