Inside the 2020 Volkswagen Tiguan: A Different Compact Crossover

With the 2020 Tiguan, Volkswagen has taken a bold step to set its compact crossover apart. For starters, they added an available third row. Between the Tiguan’s new seven-passenger capability and flexible interior (the second-row seats slide forward and back, and they fold in three sections rather than the typical two), VW’s smallest SUV makes good use of space. In that it truly distinguishes itself from its multitude of competitors.

The addition of a third row is the first significant change to the Tiguan since the current generation launched in 2018. Also new for 2020 is a WiFi hotspot, which now comes standard. Additionally, there’s new safety features like forward-collision alerts with automatic braking and a blind-spot warning system. Here is everything else you need to know about the 2020 Volkswagen Tiguan.

Nothing radical has been added to the exterior of the Tiguan for 2020. There are a few modest changes, though. They include a new SE R-Line Black trim package that offers 20-inch dark wheels, a sunroof, fog lights, and parking-alert sensors. Overall though, the exterior styling of this compact crossover has been left more or less intact. A completely refreshed Tiguan is expected to join the VW lineup in 2022. That refresh will most likely feature updated styling. Until then, though, the current model is by no means hard on the eyes. The Tiguan remains a stylish crossover, with smooth lines and rounded edges. It’s an appealing family vehicle. It certainly won’t cause you any embarrassment parked in the driveway.

The standard engine in the Tiguan remains unchanged. The 2020 model comes with a turbocharged four-cylinder engine that is capable of producing 184 horsepower. As with previous models, front-wheel drive is standard. However, Volkswagen’s 4Motion all-wheel-drive system is now an optional add-on in the Tiguan. You may want to consider it, as the standard engine has been criticized for being a bit slow to get going.

Indeed, the FWD Tiguan takes 8.2-second to go from 0-to-60 MPH. That speed won’t win the Tiguan any prizes in the acceleration category. Then again, it’s an SUV, not a race car. On the positive side, the Tiguan’s ride is comfortable and the steering responsive. The AWD model has been praised for its handling and ability to manage off-road considtions as well as city terrain. The Tiguan’s braking has been described as “soft” by some, and not nearly as firm as other VW models. It’s a minor quibble, though.

Choosing a trimline is only about features and additional equipment, as there are no different powertrain options available. Every version of the 2020 Tiguan is powered by the same 184 horsepower, turbocharged four-cylinder engine and eight-speed automatic transmission. Most reviews recommend going with at least the SE model, which adds a larger eight-inch infotainment system, keyless entry, and heated leatherette seats. The SEL trimline provides $5,000 in extras, including adaptive cruise control, a panoramic sunroof, remote start, power liftgate, and 18-inch wheels. If you have kids, it’s worth spending the extra money to add the third row of seats. You’ll be thankful for all that extra room.

Where the interior is concerned, the Tiguan remains a classic Volkswagen. As with all VWs, the German engineers have prized function over style. The second-row legroom has been criticized for being a bit tight. However, the Tiguan is one of the only vehicles in the compact crossover class that can seat seven. Sure, it helps if most of those seven are children. Even still, that’s a big plus for families.

The Tiguan comes standard with cloth seating and partial power adjustment for the front seats. Opting into more expensive trimline gets you faux-leather seating and a panoramic sunroof. Also, with just 12 cubic feet of cargo space behind the third row, the Tiguan does not provide the biggest trunk area. However, when you fold the third row down, the cargo measurements boost into middle-of-the-pack numbers. Not too shabby.

Volkswagen does offer one of the top infotainment systems on the market today. Known as Car-Net, it’s sleek, sophisticated, and features touch buttons integrated into a large glass screen. The system comes standard with Apple CarPlay and Android Auto compatibility, as well as a WiFi hotspot. A 480-watt nine-speaker Fender audio system is available in the top SEL Premium trim.

In terms of safety features, the 2020 Tiguan has been named a “Top Safety Pick” by the IIHS. Forward-collision alert with automatic braking and a blind-spot warning system come standard. Other safety features include standard automated emergency braking, blind-spot monitoring, and available adaptive cruise control. If safety is important to you and your family, then the Tiguan is a great choice.

Previous models of the Tiguan came with what was considered the best bumper-to-bumper warranty in the automotive industry. Volkswagen used to offer a six year, 72,000-mile warranty on the Tiguan. Sadly, that coverage has now been reduced. The 2020 model comes with a four year, 50,000 miles warranty. That includes the powertrain. To help make the reduced coverage a little easier to accept, all 2020 Volkswagens (including the Tiguan) come with two years of free regularly scheduled maintenance. It’s not quite a great trade-off, but it’s better than nothing.

The Tiguan has good fuel economy in both the front- and all-wheel-drive versions. The EPA has rated the 2020 Tiguan at 32 miles per gallon of city driving and 33 MPG on the highway. It’s impressive to see a crossover surpass 30 MPG. It’s a superior number compared to many of Volkswagen’s competitors. The Tiguan’s fuel economy is great news for drivers who spend a lot of time on the open road.

Volkswagen has clearly designed the 2020 Tiguan with your family in mind. The addition of a third row is meant to help parents who have a lot of children (and their belongings) to shuttle around. While the Tiguan might be lacking in acceleration and the handling might not be best-in-class, those issues aren’t likely to matter much to parents. You’re probably more concerned with safety and reliability than the 0-to-60 time.

In those areas, the Tiguan delivers. It’s been rated incredible safe and offers a superior infotainment system and overall connectivity. Those features will please both you and your young passengers. If you’re a parent who wants a vehicle that can get your family where it needs to go without any worries, then you should definitely give consideration to the 2020 Tiguan. It will do the job nicely, and you’ll look great behind the wheel too. 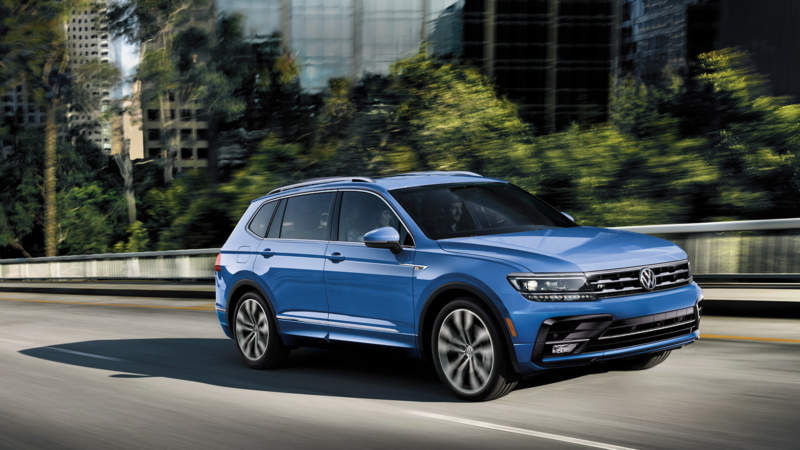