Inside The 2019 GMC Canyon: A Midsize Pickup That Truly Shines

It wasn’t very long ago that America wasn’t all that interested in pickup trucks smaller than full-size light-duty models like the F-150, Sierra 1500, and Silverado 1500. The rest of the world, however, was still into midsize and even compact trucks, meaning every major manufacturer offers one. Although there’s no sign of the bigger trucks finding favor in Europe and Asia anytime soon, North America is definitely warming to some of the smaller models.

Although Japanese manufacturers are the global kings when it comes to smaller pickups, one of the best we have seen is the 2019 GMC Canyon. The Canyon was launched back in 2003, so it’s not exactly a newcomer to the market. If you want the extra utility of a pickup as a versatile alternative to a sedan or a crossover, but in a manageable size for town or city driving, then the Canyon should be at the top of your list.

It’s entirely possible we’ve never taken to Honda, Nissan, or Toyota midsize pickups in a huge way because they don’t look how we “expect” a pickup truck to look. The models these manufacturers sell around the world are generally a little sleeker, sportier, and more contemporary than North America’s full-size truck designs. While the 2019 GMC Canyon isn’t quite a shrunken copy of a Sierra, it does look every inch a domestic pickup truck and it takes a lot of styling cues from its bigger brother.

The Canyon is a bit boxier and chunkier than a lot of midsize rivals, and it’s blockier and more workmanlike than the related Chevy Colorado, thanks to its tall grille, and rectangular headlights and wheel arches. The high beltline is one of the sportier styling cues of the Canyon, and it can look very upscale in the top-level Denali trim, with its big wheels and lashings of chrome.

If you want full-size styling without the full-size dimensions, you’re going to be hard pressed to find a better option than the 2019 Canyon.

GMC’s website refers to the 2019 Canyon as a small truck, but at close to 19-feet in length, this isn’t what most people would call small. The range isn’t too diminutive either, as the 2019 GMC Canyon is available in six different trim levels, two cab bodies, a variety of beds, and a number of capable powertrain options.

The range starts with the SL, and then it goes to the Canyon, SLE, All Terrain, SLT, and then the range-topping Denali. As usual, each step up the ladder offers more features in exchange for a higher price tag.

A 2.5-liter inline-four is the base engine option for the 2019 Canyon, which puts out 200 horsepower and 191 lb.-ft. of torque, sent to the rear wheels through a standard six-speed manual transmission. A six-speed automatic is an option with this engine, and it becomes the standard transmission if you opt for all-wheel drive.

If that’s not enough power for what you have in mind for your new truck, the Canyon is also available with a 3.6-liter V-6 instead. This unit develops 308 hp and 275 lb.-ft. of torque, and it also comes with a stronger eight-speed automatic transmission. This engine is by far the most popular option with Canyon-buyers, probably because of its extra power and the fact it doesn’t hurt fuel economy too badly, compared to the inline-four.

That’s not the end of it though, and that’s because the GMC Canyon also offers buyers the option of a turbodiesel. The unit in question is a 2.8-liter inline-four turbodiesel, which although it only produces 186 hp, does come into its own for towing with a massive 369 lb.-ft. of torque. This engine is exclusively mated to a six-speed automatic transmission, and it can tow up to as much as 7,700 pounds when properly equipped.

You can get a very basic model with vinyl seats and flooring for quick, easy cleaning, but you’re unlikely to find one like that new on a lot, since it’s only really a fleet model. The base Canyon is where you’re likely to start, and its interior every bit as comfortable of a sedan in the same sort of price bracket. SLT and Denali trim levels replace cloth upholstery with real leather, but the Denali trim is more about style than anything else. You may be more than happy with the SLT version, if you want a comfortable and luxurious interior without paying for top level status.

The rear seats are understandably tight in the extended cab, so those looking to buy the Canyon as a family vehicle will want to go for the Crew Cab. It’s still no SUV in terms of family-friendly interior space, but there’s still enough room for five if you’re looking for something more versatile and are prepared to compromise on space a little.

Even the fleet-focused Canyon SL comes standard with a power driver’s seat, windows, and locks, and a 7.0-inch infotainment system that’s Apple CarPlay and Android Auto compatible. The SLE and higher is probably where most retail buyers will want to start. The SLE packs some impressive standard equipment such as a high-definition rear vision camera, a six-way power driver seat, heated power-adjustable exterior mirrors, remote keyless entry, a leather-wrapped steering wheel with audio controls, and the EZ-Lift and Lower Tailgate.

If you’re the kind of person who doesn’t need more than five seats in your vehicle, but you like to do things and go places a sedan isn’t really suitable for, the 2019 GMC Canyon midsize pickup truck is a great alternative — especially if a full-size is a little too much truck for your liking. The starting MSRP of $22,200 doesn’t just sound reasonable, it’s positively cheap. However, if you’re looking to use a Canyon as your daily family vehicle, even the SLE Crew Cab looks pretty good value from $32,600 compared to an equivalent SUV. 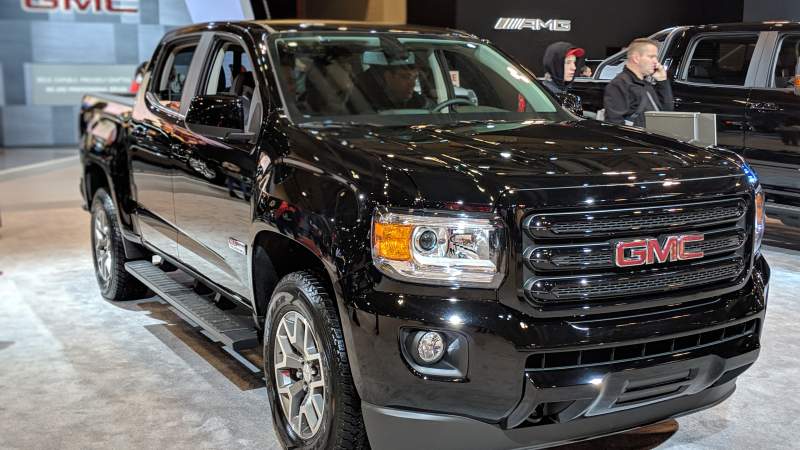