A global shortage of computer microchips is forcing automakers to scale back production. A Ford plant in Louisville, Kentucky was forced to temporarily halt production this week. The problem was a shortage of critical microprocessors and other computer chips that help power today’s vehicles.

Fiat Chrysler was also forced to idle production in Ontario, Canada. Meanwhile Subaru announced that it will cut several thousand vehicles from its production schedule in the U.S. and Japan due to the microchip shortages. General Motors, Honda, Renault, Toyota and Volkswagen have also reported chip shortages in recent weeks.

The microchip shortage comes as automakers try to rebound from the Covid-19 pandemic. Most manufacturers have ramped up production to respond to vehicle inventory shortages. However, that puts them in direct competition for microchips. The consumer electronics industry facing its own surge in demand, as new video game consoles and smartphones continue to come to market.

Fiat Chrysler has scheduled downtime at its Canadian plant, which builds the Chrysler 300, Dodge Charger and Dodge Challenger. They have also delayed a full resumption of production at their Jeep factory in Mexico as a result of the chip shortage.

Subaru, meanwhile, is trimming output at an Indiana plant. They also halted production at a factory in Japan for two days while they assesses its supply situation. Nissan has also cut production in Japan, while Volkswagen has slowed operations at factories in North America, Europe, and China. The shortage is creating bottlenecks for just about everyone.

Why the Chips Matter

Manufacturers have been reluctant to openly discuss the shortage in detail, citing competitive concerns. However, the biggest problems involve microprocessors and other digital devices used to control engines and transmissions. There have also been supply constraints involving the WiFi, Bluetooth, and video display systems that are becoming ubiquitous in today’s vehicles. Microchips are also needed for safety systems, like blind-spot monitoring.

The pandemic led to a lengthy shutdown of auto plants in North America last spring. Facilities in Europe, Latin America, and Asia were also affected. When sales bounced back more quickly than expected this past autumn, manufacturers started pushing production to the max to make up for depleted inventories. This led, in part, to the microchip shortage.

The consumer electronics industry is also competing with the auto industry for these chips. There is currently record for smartphones, computers, gaming consoles, web cameras, monitors, and other devices as people work and attend school from home. In recent months, the consumer electronics industry has faced microchip shortages of its own. There is currently no consensus on when the microchip shortage might be resolved. 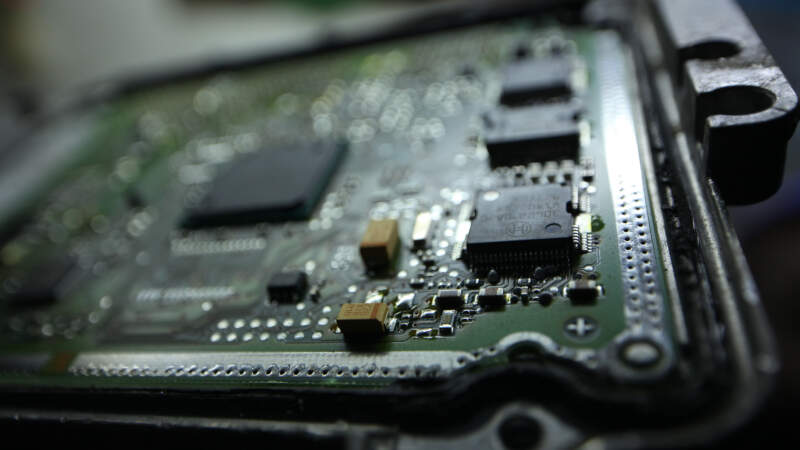