The Smallest Cars You Can Buy Right Now

While larger pick-up trucks and SUVs may be popular with consumers, they aren’t the only vehicle options available today. There are a number of extremely small subcompact cars that act as a counterweight to the bigger, more aggressive and less fuel-efficient rigs that seem to dominate the industry. Many of these tiny vehicles are popular in Europe and Asia. They have found a niche appeal with motorists who value fuel-efficiency and maneuverability over size and ruggedness. Here is a list of the ten smallest cars that you can buy today and what makes each one of them unique.

It’s not the smallest car on this list, but make no mistake about the Renault Twingo, It is definitely a subcompact vehicle. At just 3,595 millimeters long, the Twingo is designed for economy. It features a tiny turning circle, a very small boot for minimal storage, and folding rear seats. The engine sits under the floor in the boot, which provides the Twingo with some front-end space for luggage. But not very much.

Inside, the Twingo’s interior design is deliberately funky in order to appeal to younger twenty-something motorists. Unlike many of the other cars on this list, the Twingo actually has room for four people rather than just two (or less). However, those passenger seats take away from the Twingo’s overall storage space. The bonnet is just large enough to house a bottle of anti-freeze and maybe some windshield washer fluid. That’s about it.

The i10 has the distinction of being the smallest car in Hyundai’s line-up. At a scant 3,665 millimeters long and 1,660 millimeters wide, the i10 is very small. Surprisingly, it’s also quite stylish and finished to a remarkably high degree. The i10 has space for four adults, plus 252 liters of storage space. Owners also get a choice of 1.0 or 1.2-liter engines.

For the ultimate in small-car economy, the 1.0-liter SE Blue model is the best choice. It gets an impressive 71 miles per gallon of fuel economy. The i10 has won numerous industry awards, including being named “Best City Car” in 2015. It also sports an all black interior that comes as a standard feature, though there is an option to switch the interior to red or blue at no extra cost. You also have the option to pay for safety upgrades such as lane-departure warning and forward collision warning systems.

It’s no surprise to find a Fiat on this list. Fiat has a long history of making extremely small, subcompact cars. The Fiat 500 is among the company’s most popular and well-known nameplates. Measuring a sight 3,571 millimeters from end-to-end means it provides the compact dimensions vital for parking in congested European cities such as Paris or Rome.

Inside, though, the 500 is quite roomy with enough space for four adults (although there is only a two-door model available). Trunk space isn’t great but its 185 liters of space can expand to 550 liters when you fold the back seats down. A “city mode” makes the steering ultra light so moving into tight spaces is a cinch when parking. One of the more luxurious and stylish of the ultra subcompact cars, the Fiat 500 has been designed for upmarket appeal among Generation Y and Z.

While it might not be well-known in North America, the Volkswagen up! has long been a popular hatchback in Europe and Asia where space is a premium. The up! measures 3,540 millimeters end-to-end. That’s pretty tiny! Nevertheless, there’s space for four people inside and a trunk that’s larger than you might expect at first glance.

The up! is powered by a 1.0-liter petrol engine or an alternative electric engine that is known as the “Volkswagen e-up!” The engine is also a bit of a powerhouse, being able to hit 62 mph in only 13.5 seconds. If performance is really important to you, the most powerful turbocharged engine can do the same sprint in 9.9 seconds flat. That makes the up! a small but mighty car. Did we mention that there is also an up! GTI model that is popular with street racers? The up! proves that just because you’re small, doesn’t mean you can’t pack a punch.

Another brand that you would expect to see here is Smart. The ForFour is a small car among all the small cars manufactured by Smart. The name comes from the fact that this model still seats four people. The 3,495-millimeter ForFour has a reputation for being nimble. The engine is positioned under the trunk floor, which means that the trunk itself has just 180 liters of storage space. But you don’t really by a Smart car to haul things in, do you?

Power comes from a 1.0-liter engine, with a choice of manual or automatic transmission. The car’s trim line is expansive and offers a number of different options and equipment. One reason to choose the ForFour is the ability to customize it. Smart allows you to order the ForFour in a variety of colors, as well as the option of orange interior trim. You can even order rose gold accents, if that’s your style.

The Peugeot iOn is unique. It’s not only extremely tiny, but is also all-electric. It measures just 3,474 millimeters but has seating for four – although putting adults in the rear might be a stretch. The battery in the 2020 version of the iOn offers 93 miles of range on a single charge. There’s a 166-liter trunk, which is smaller than most other cars on this list – though the back seats do fold down.

Since it’s electric powered, the iOn is very quiet. It’s also worth noting though that the iOn is quite narrow. This is a tall but skinny ride, meaning that there’s plenty of headroom for adults but not a lot of width to accommodate girth. One of the few available options is a cold package, which adds a heated driver’s seat and heated side mirrors.

The iOn is very much an urban car. Peugeot basically expects it to be used by a single driver, or one driver and passenger. The rear seats are really designed only for children, at best. Adults should expect minimal leg room in the rear. The 166-liter trunk can fit a grocery bag or two but not much else. Don’t expect to squeeze a set of golf clubs into the iOn. Oh, and it’s also known as the Mitsubishi i-MiEV in some counties.

Now we’re getting really small. The Toyota Aygo, which is a popular choice in Asian cities such as Tokyo and Seoul, measures just 3,455 millimeters. You might think such a small vehicle would make you feel claustrophobic. Fortunately, the Aygo has a roof that reclines to provide occupants with an open convertible feel. Problem solved!

The Aygo comes with 71 horsepower 1.0-liter engine. It has been praised for its style, especially for being such a compact vehicle. There are several trim levels to choose from, giving consumers plenty of customization. The most expensive model, the x-i, costs almost $20,000. That may seem like a lot of money for a super compact, but Toyota claims the style and performance of the Aygo make it worth the expense. Plus, you can literally park this car anywhere. It will fit in the narrowest of parking spots. Trust us.

Suzuki has long had a reputation for making tiny cars. The tradition continues with the Celerio, one of the most minuscule vehicles in the world. Just 3.6 meters long and 1.6 meters wide, the Celerio still has what feels like a spacious interior. The engineers at Suzuki claim that four adults can fit in this car comfortably. While we’ll take their word for it, there’s no denying the impressive 254-liter trunk, one of the biggest on this list. Or the folding back seats that increase the storage capacity to 725 liters.

The Celerio has a 1.0-liter engine that is great on gas. You also get to choose a manual or automatic transmission and there are three trim levels to select from. The top trim line comes with Bluetooth connectivity and alloy wheels, as well as satellite navigation. For a subcompact car, the Celerio is actually pretty slick.

Another model from Smart, this time the Fortwo. You probably guessed from the name, but this car seats exactly two people and no more. While Smart has increased the size of the Fortwo from the original size, it’s still extremely small. So tiny, in fact, that you may wonder how such a small vehicle was even engineered.

Measuring only 2,500 millimeters from nose-to-tail, the Fortwo has seating for two but a shockingly large trunk. In fact, it’s almost as big as a Ford Fiesta in terms of the trunk space. The engine sits in the back. The Fortwo comes in rear-wheel drive only. However, a six-speed dual-clutch automatic transmission has been called “fun” by reviewers, while the car’s diminutive appearance has been labeled “cute.”

Here we have it. The smallest car you can buy today is the Renault Twizy. It’s as close to a motorized go-kart as it a car. The Twizy measures a mere 2,338 millimeters long, which makes it the tiniest car on this list. It’s also the narrowest, due to seating that puts people one behind the other instead of side-by-side.

The Twizy is an all-electric vehicle that’s has no side windows or doors fitted as standard. It also has a fairly sparse interior. Critics have called the Twizy a “scooter.” That may have something to do with the fact that it has no side windows, meaning it can be cold and wet to ride in depending on the weather. Windows can be added to some models, though.

However, environmentally-conscious urbanites often find the Twizy appealing. But make no mistake, this is not a family vehicle. After all, there’s no real trunk space to speak. Or any space for that matter. Still, if outrageously tiny and eco-conscience is your thing, then the Twizy might be the vehicle for you. 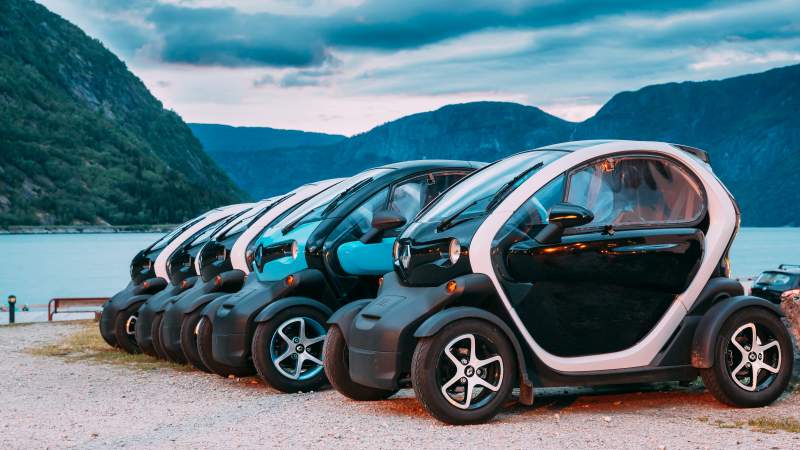