The Most Affordable Luxury Crossover SUVs

A crossover vehicle is a type of SUV, whose body is based on a platform shared with a traditional car. This leads to crossovers being more comfortable and, generally speaking, offering superior fuel economy compared to traditional SUVs. However, crossovers tend to be made more for urban driving. They have less off-road ability than standard SUVs.

Most crossovers don’t have all-wheel drive capability, since the term crossover is frequently applied to compact and subcompact SUVs. However you define it, there is no doubting that crossovers are extremely popular. In the U.S., roughly 50% of all SUVs sold are crossover models. Here are the eight most affordable luxury crossovers sold today.

For $30,000, you can get into the impressive Infiniti QX30. That gets you some of the best automotive engineering in the world, from a respected brand. You also get a 2.0 liter engine, seven-speed auto-shift manual transmission, 18-inch aluminum wheelsm and a very cool interior. Critics describe the QX30 as among the most stylish crossovers anywhere.

At this price, it’s hard to turn away. Infiniti’s other models sell for well north of $50,000, making the QX30 among its cheapest nameplates. If you’ve always been curious about the Infiniti brand, start by checking out the QX30. It’s a sweet ride, made all the sweeter by its price.

Leather interior, responsive handling, dual zone climate control, and a large cargo space round out the benefits of this crossover. Really, you get a great deal for under $35,000. Not to mention the engineering that has made Mercedes one of the most reputable carmakers in the world.

Almost as affordable as the GLA 250 is the XC40 crossover from Volvo. The starting price of $33,700 should catch the attention of anyone looking for a great vehicle at a great price. You will get a lot out of any Volvo, including a rich amount of safety features, loads of cargo room, and style that the Swedish automaker has become known for. Anytime you can get into a new Volvo for under $35,000, it’s a good deal. The XC40 does not disappoint. It’s a luxury crossover that is practical, well-made, and easy on the pocketbook. Definitely worth considering the next time you are car shopping.

Audi is a premier luxury brand and the Q3 is a top player in the crossover market. While not as big as some of Audi’s more traditional SUVs, the Q3 is still a sporty and nimble ride that critics and consumers seem to appreciate. The Q3 provides style and performance in equal measure.

As we’ve mentioned before, U.S. World has named the Q3 one of the top five compact luxury vehicles available today. The magazine praises the Q3’s spacious interior, powerful engine, and large cargo area when compared to the competition. Throw in heated seats, a head-up display, and large infotainment system that is compatible with Android Auto and Apple CarPlay and you’ve got a winner on your hands. All for only $34,700.

The BMW X2 is a luxury subcompact crossover that is surprisingly affordable for a Beemer. It’s very appealing to all buyers at a starting price of $36,400. For that price, you get standard features that include a 2.0 liter, I-4 228 horsepower intercooled turbo engine, an eight-speed automatic transmission with “overdrive,” four-wheel anti-lock brakes (ABS), an integrated navigation system that is very impressive, automatic air conditioning, 18″ aluminum wheels, cruise control, and traction control. It also has leather interior and surround sound speakers. This is a fun and affordable crossover. Great for city driving, day or night.

You don’t normally expect to get into any Lexus vehicle for around $35,000. However, for just $35,985 you can get into the luxurious Lexus NX300, one of the most well-appointed luxury crossovers on the market. Priced to sell, the Lexus NX300 has standard features that include a turbo engine, six-speed automatic transmission with overdrive, four-wheel anti-lock brakes, side seat mounted airbags, 17″ aluminum wheels, cruise control, and an all-wheel drive option.

The interior is comfy and roomy, and the GPS and infotainment system are cutting edge. With so much to offer, many people have to look twice at the price of this Lexus. Most vehicles they sell are priced at more than $50,000. To get into a brand-new Lexus SUV at this price is a dream come true for many people.

The Lincoln Corsair is among the newest crossovers on this list. That doesn’t mean it should be overlooked though. The Corsair replaces the former Lincoln MKC nameplate and aims to compete against other crossovers from the likes of Audi, BMW and Mercedes. It has a good chance of winning the fight too, with two turbocharged four-cylinder engines that can hit 60 mph in 6.6-seconds.

The technology is also quite advanced in the Corsair, with an 8-inch touchscreen infotainment system that runs Lincoln’s patented “Sync 3” system. There’s also a 12.3-inch digital gauge cluster, a head-up display, and an app that allows users to unlock, lock, and start the vehicle with their smartphone. Safety features include numerous driver-assist features that are bundled together as part of the Co-Pilot360 suite. These include blind-spot monitoring, automated emergency braking, and lane-keeping assist. A steal at $39,000.

At just over $40,000 is the Rover Evoque. It’s a top luxury crossover that is built for both paved and dirt roads. The Evoque is known for having a fancy cabin, super powerful engine, and impressive off-road capabilities. It impresses both downtown or at out on the campsite.

The good news is that Land Rover is redesigning the Evoque for 2020. The latest Evoque is powered by a 296-horsepower turbocharged four-cylinder engine. If you’d prefer a greener option, a hybrid version was introduced for 2020. That’s a huge selling point for environmentally conscious drivers.

The all-new Evoque comes with a suite of active and passive safety features, including adaptive cruise control, a rear-view camera, lane keep assist, emergency braking, and a driver condition monitor. A WiFi hot spot, six USB ports, and rear-seat tablet holders all come standard for the relatively decent price of $41,800. 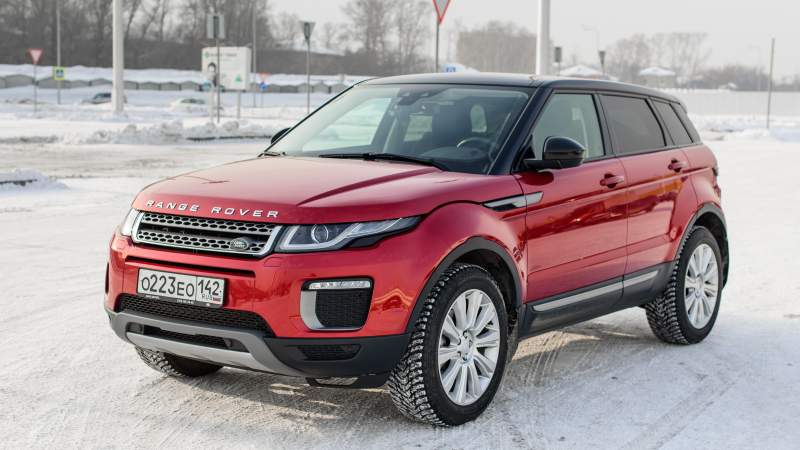