The 11 Coolest Convertibles Of All-Time

Nothing says summer quite like spinning around in a classic convertible. Slide some shades on and let the wind blow through your hair! Over the years, there have been some real beauties made when it comes to cars with a removable or collapsible top. Many of the most beloved (and expensive) cars ever made have been convertibles. Whether you need to wait until those warm summer months or live somewhere it’s warm all year round, there’s never a bad time to rank the 11 coolest convertibles of all time. Eat your hearts out!

For pure luxury and excitement, look no further than the 1,200 horsepower turbocharged Bugatti Veyron 16.4 Grand Sport Vitesse. This is the most powerful production convertible ever designed and assembled. Bugatti claims that this convertible can hit 60 mph in only 2.6 seconds. Within 16 seconds, drivers can be traveling at 186 miles per hour. At those speeds, occupants will be picking bugs out of their teeth.

Not only is the Grand Sport Vitesse fast, it’s also incredibly luxurious inside. It has all the technology and design elements you would expect in the world’s fastest convertible. Take note though, that at a starting price of $2.6 million, this is also one of the most expensive convertibles on the planet. Still, if you have the means, we highly recommend it.

The Miata remains a classic convertible. In 2016, Mazda gave this popular model a facelift, upgrading it under the new MX-5 moniker. Smaller, lighter, and with an improved suspension, the latest version of this automotive icon continues the Miata’s impressive lineage. This Mazda also remains comparatively affordable at just $25,000. The price helps ensure that this car is often the very first convertible that people own.

Seventeen-inch alloy wheels, a Bose premium audio system with nine speakers (including in the head rests), and heated seats round out the ways in which the Mazda MX-5 Miata is an exceptional convertible. The car also has Mazda’s patented SKYACTIV technology and engine function, giving this car some power and heft.

Back to the more expensive convertibles. They don’t come much more expensive than the ultra-cool 1967 Ferrari 275 GTS NART Spyder. With a V-12 engine under the hood and six Weber carburetors rated for 300 horsepower, this is a convertible that performs. And looks great doing so.

The Spyder has a top speed of 166 mph, making it a performance car that Ferrari aficionados the world over want to get their hands on. Good luck snagging one, though, as only 10 Ferrari 275 GTS NART Spyders were ever built. Due to production cost overruns, Ferrari was forced to sell these convertibles at a deep discount and cancel production early back in 1967. But today, an original one of these convertibles sells for $20 million or more.

This is another super cool and relatively rare convertible. Created by Italian design house Pininfarina, the Alfa Romeo Spider (Duetto, Veloce) Series I was the last model founder Battista Farina was involved with. The Spider features a unitized-body construction with multiple crumple zones at the front and back.

Originally powered by a 108-horsepower engine with mechanical fuel injection for American models, this is a classic convertible that still impresses. Collectors love everything about this convertible, especially its sleek, rounded body and classic 1960s vibe. One of the coolest convertibles ever made.

Convertible drivers could do a lot worse than to own the high-end, top-of-the-line Aston Martin V-12 Vantage Roadster. This car is without a doubt one of the sleekest, fastest and sexiest cars on this list. Propelled by a 430 horsepower, V-12 engine, the V-12 Vantage has exceptional style and automotive engineering.

At a base price of $190,000, you will need a lot of coin to be able to get behind the wheel. But if you can afforded it, it is worth the financial investment. The Vantage can go from 0 to 60 mph in 3.7 seconds and has been winning over automotive critics around the world for the way in which it combines luxury, speed, power, and performance into one beautiful convertible design.

Add in rear suicide doors, and the Continental convertible is an infamous car from the early 1960s. It was often seen driven by teens were known to cruise the local strip and show off their ride. Sadly, the 1961 Lincoln Continental is also the presidential limo that President John F. Kennedy was riding in when he was assassinated. Despite that grim historical fact, collectors continue to love the convertible Lincoln Continental.

After its spring debut at the 1964 New York World’s Fair, the 1965 Ford Mustang went on to become one of the most iconic American cars ever. In fact, this is often the first car that springs to mind when people think “convertible.” Originally available with four engines including a 101-horsepower 170 cubic inch I-6 engine, this car was eventually upgraded to a 164-horsepower 260 cubic inch V-8 engine.

It was this upgraded V8 engine version that is credited with ushering in the era of Pony cars that include the Chevrolet Camaro and Plymouth Barracuda. But nothing beats the convertible version of the 1965 Mustang. It has all the cool style of the original Mustang, but with the added bonus of being able to put the top down.

No discussion of convertibles would be complete without mentioning Porsche. The car brand that is arguably most associated with convertibles, Porsche makes a number of convertible models that are worth drooling over. The one that really gets us salivating is the classic 718 Boxster. When it comes to smaller, sporty convertibles, few cars can match this one. Plus the Boxster is an extremely powerful ride, which is made more impressive given its size.

The 2017 Porsche Boxster is equipped with the same powerful engine as previous models – a 2.5 litre, four-cylinder – but comes in an upgraded and redesigned frame. Two seats and $56,000 is all you need to get into this car and complete the experience of driving in a true automotive masterpiece. Older model Porsche 718 Boxsters are even more classic looking and impressive. Many sell for top dollar at car auctions around the world.

Known within the German company as its “youth car,” the BMW 2-Series convertible has a lot to recommend. Not only is it relatively affordable at a base price of around $40,000, but the 2-Series also seats four people even though it is a two-door model. With a 2.0-liter four-cylinder engine under the hood, the 2-Series is essentially a roadster designed for summer drives.

In addition to impeccable style, people who purchase this vehicle also get BMW’s trademark engineering. Those include unique features like the ability to make phone calls in your native language when abroad, real-time traffic information in your vicinity, and internet connectivity from virtually any location in the world. Critics have noted the comfort and roominess of the 2-Series, stating that the car remains comfortable even when four people are in it.

The only thing better than a regular Jaguar is a convertible version. The F-Type is a premier car from the Jaguar brand. Sporty and powerful, but with the Jaguar signature style and panache, the convertible F-Type is a car to be enjoyed from the first warm day of the year to the last.

A five-liter, V8 engine will not disappoint, and neither will the luxury interior of this car. It has seating for two and amenities such as all wheel drive, carbon brakes, torque vectoring, and enough interior technology to make James Bond envious. This Jag is a car worth celebrating. The leather racing seats are a nice touch too. People who see you out for a spin in this convertible will be picking their jaws up off the pavement.

The Corvette Stingray is a classic car in every sense of the word. The cherry red convertible version of this car is arguably the coolest convertible of all-time. Consistently voted one of America’s most iconic sports cars, the Stingray continues to impress in its latest incarnation. For about $60,000, you can drive this convertible that has a V8 engine under the hood, two seats, and 465 pounds of torque per foot.

This baby can go from zero to 60 in less than 4 seconds.  It’s perfect for street racing, cruising the strip, and impressing everyone you pass. This beautiful car is also surprisingly fuel efficient, boasting 29 gallons per mile of highway driving. Trick this car out with Apple CarPlay and your favorite playlist, and you’ll be loving life all summer long. 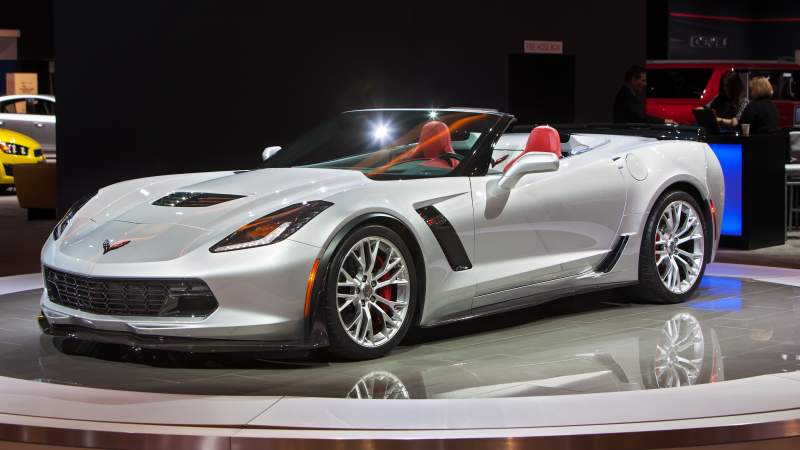