Inside The 2019 Mazda CX-5: A Compact Crossover For Everyone

At some point in their life cycle just about every vehicle can claim to be an award-winner of some sort, mostly because there are so many industry awards these days that it’s almost hard not to win at least one of them. But sometimes, a model comes along where a manufacturer just gets everything right, and the 2019 Mazda CX-5 could well be one of these occasions.

The CX-5 is a compact crossover which is the right type, size, shape, level, and price of vehicle to be a big success in the current market. There will always be a place for bigger, smaller, cheaper, more expensive and more performance-orientated SUV models. But as most politicians will tell you, popular success usually comes from the center ground, which is exactly the space in the market the CX-5 inhabits. Not convinced? Then let’s take a closer look.

Apart from perhaps Hyundai and Kia, it’s hard to think of any other automakers that have improved the styling of their vehicles to the same degree as Mazda in the last decade. The 2019 Mazda CX-5 is a prime example of the Japanese manufacturer’s stunning design work. Mazda calls it “KODO – Soul of Motion” design language, but the rest of us just call the CX-5 a fabulous-looking compact crossover.

While a lot of rivals are starting to look increasingly alike, (plus a few others that have gone so far in the opposite direction to try and be different, they just end up looking weird), this second-generation Mazda CX-5 has got everything in this department just right. There’s a sporty element to the styling, but it stops short of looking like a running shoe with wheels like the Ford Escape is sometimes accused of. It also looks achingly modern, but not as far “out there” as something like the Lexus NX, which has a polarizing style. It also stays clear of anything that can be in any way regarded as funky, which is the direction Nissan went with the Juke. And we all know how that’s ended.

You can’t even go and pay two or three times as much for a BMW, Mercedes, or Audi to get a better-looking SUV, because nothing from those brands have exterior styling that rival the Mazda  — except for the luxury company logo on the front. Yes, it really is that attractive.

There are two engines in the 2019 CX-5 lineup, and both of them are more than up to the job. Unfortunately, you can’t upgrade to the more powerful option without going up to the higher trim levels.

The standard engine in the Sport, Touring, and Grand Touring models is a naturally aspirated 2.5-liter four-cylinder that puts out 187 horsepower and 186 lb.-ft. of torque and features cylinder deactivation technology. This engine sends its power to the front wheels of the CX-5 through a six-speed automatic transmission.

If you want to get more power in your CX-5, you’ll have to spring the extra cash for either the Grand Touring Reserve or the Signature models. The engine on those two is a 2.5-liter turbocharged four-cylinder, which then puts 227 hp and 310 lb.-ft. of torque at your disposal when running on standard gas. Opt from premium gas in your tank instead, and then this unit will develop 250 hp. This engine uses the same transmission as the non-turbo unit, but the top two trim levels that get this engine are also standard all-wheel-drive. Front-drive isn’t an option with this engine.

This isn’t a performance SUV, but it’s no slouch either. Models equipped with the non-turbo engine can get you from 0 to 60 mph in as little as 8.6 seconds, which isn’t terrible for a vehicle weighing between 3,541 pounds and 3,825 pounds, depending on model and specification. On the other hand, the turbocharged engine gets the CX-5 to 60 mph from a standing start in as little as 7.3 seconds, but it probably won’t come as much of a surprise that this time was achieved using 93-octane gas.

Along with its decent engines, the CX-5 also boasts independent suspension all-round, with struts in front and links at the back that help deliver an enjoyable driving experience and excellent ride quality. Turbo-lag is a slight issue with the more powerful engine, but once the power kicks in you will really be on your way.

Add into the equation a re-tuned chassis and electric power steering that works better than the steering systems found in any of the Mazda’s rivals, and the CX-5 shows itself as one of the best riding and driving models in its class.

Those with the pleasure of sitting in the front of the CX-5 are well catered for, and it’s a similar story for your luggage. However, those who have to sit in the second-row seats are not blessed with copious amounts of space. The seats are nicely sculptured and pretty comfortable, but legroom in the back can be an issue for taller passengers. It’s not a major issue if the rear passengers are going to be children most of the time.

The Mazda isn’t the biggest five-seat compact crossover out there, so you should take that into consideration if you’re looking to buy for a family. Although the interior isn’t anywhere near as stylish as the exterior, it’s a perfectly acceptable design that won’t disappoint. The quality of the fit and materials is very good, especially in higher trim levels that can start to look and feel quite luxurious.

Standard equipment in the entry-level CX-5 Sport model includes: a full set of power features, cloth upholstery, 17-inch alloy wheels, LED headlights, blind-spot monitors, low-speed automatic emergency braking, and a 7.0-inch touchscreen infotainment system. To be fair, a lack of responsiveness with the touchscreen and a less than intuitive operating system means the infotainment system isn’t the Mazda’s strongest point. And to get Apple CarPlay and Android Auto compatibility, you’ll have to upgrade to the CX-5 Touring.

Grand Touring and Signature models are extremely well equipped and very upscale inside, but at close to $40,000 for a Signature. At that price, there are genuine luxury models which will start to look like legitimately tempting rival options. Lower down the trim level spectrum though, and the 2019 Mazda CX-5 is really good value for money.

Unless you have an unlimited budget at your disposal, you’re always going to have to accept compromises in some departments with any new vehicle you’re looking to buy. The trick is to find the one where you minimize those compromises, and that’s where the 2019 Mazda CX-5 comes in. To be fair, there are other compact crossovers around that are just as good value for money, but none of them look anywhere near as good as this one. 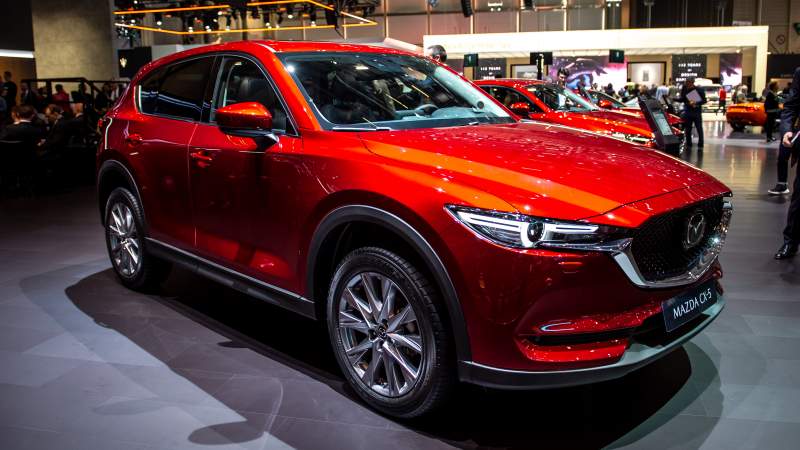