Inside the 2021 Toyota Mirai: A Cutting-Edge Hydrogen Sedan

Toyota has been producing hydrogen fuel-cell cars since 2014. However, the world is only starting to take notice now, especially with the introduction of the all-new 2021 Toyota Mirai. The new 2021 Mirai is a huge improvement over the outgoing model. It offers better styling, improved handling, increased performance, enhanced refinement, and ultimately, more range. The 2021 Mirai joins the likes of the 2021 Honda Clarity Fuel Cell and the 2021 Hyundai Nexo in a segment that is expected to grow significantly in the coming years.

However, there is a catch with the Mirai. Currently, you can only get it in California. That’s because only California has a large enough network of hydrogen fuel stations. At the end of 2020, the “Californian Hydrogen Highway” consisted of 42 hydrogen fuel stations, with 15 more under construction. Toyota will probably start selling the 2021 Mirai in other states once they have the infrastructure to support it. For those who live in California, or those who are just curious about the future, here’s everything you need to know about the 2021 Toyota Mirai.

The 2021 Mirai has been rebuilt from the ground up on Toyota’s GA-L platform. That same platform also underpins the Lexus LS sedan. This more refined, rear-wheel drive platform delivers a sportier and more composed driving experience. The new Mirai is 3.3 inches longer and 2.7 inches wider than its predecessor. Its wheelbase is also 5.5 inches longer. With a curb weight of 4,255 pounds, this car is also 176 pounds heavier than the outgoing model.

The 2021 Mirai also features a bolder, longer, lower, and wider body. The main attraction is the more powerful FCEV (fuel cell electric vehicle) powertrain, though. The new Mirai offers 30% more range, a more luxurious interior, advanced technology, and a wide range of premium convenience features. Unlike the prior model that was only available in a single trim, the 2021 model now has two versions to choose from.

Exterior Styling: From Quirky to Elegant

The design of the Mirai has changed substantially. Before, it looked more like a quirkily styled version of the Prius. Now it looks like a large, executive sedan. The new Mirai has a bolder front fascia with a large and elegant lower grille. Then there’s eye-catching, sweptback LED headlights with separate daytime running lights. It also boasts a coupe-like shape, with sweeping lines and flowing curves. Overall, it just has a bolder, more athletic stance.

The roofline curves all the way to the rear decklid, just like the fastbacks of old. The back end gets a sporty design complete with a spoiler, aggressively styled rear bumper, and sleek LED tail lights that connect across the rear. The 2021 Mirai’s standard 19-inch twin-spoke aluminum alloy wheels also make quite a statement. A set of 20-inch super chrome aluminum alloys are also on offer, if you prefer. According to Toyota, the 2021 Mirai is available in five colors: Black, Hydro Blue, Supersonic Red, Oxygen White, and Heavy Metal.

What’s Under the Hood: A Powertrain From the Future

Being a hydrogen fuel-cell car, the 2021 Mirai is, by definition, an EV. Most regular EV have lithium-ion battery that is recharged directly from an external power source. The Mirai, however, is designed to generate that electricity through a chemical reaction between hydrogen and oxygen that occurs within a fuel cell stack. That electricity is then stored in a lithium-ion battery pack and used to drive the car. The only byproduct of the chemical reaction is water.

The 2021 Mirai has three hydrogen tanks. According to Toyota it takes just five minutes to fill them up with 11 pounds of hydrogen. Additionally, there’s also a regenerative braking system that harnesses electric energy generated during braking. The Mirai is powered by a single electric motor that generates 182 hp and 221 lb-ft. of torque. According to CarAndDriver, that’s enough to complete a 0-to-60 mph run in 9.1 seconds. Power is sent to the rear wheels via a one-speed direct-drive transmission. It’s not a speed demon off the line, but it doesn’t claim to be either.

What’s Inside: A Lexus-Like Cabin

The all-new Mirai looks and feels way more luxurious than its predecessor. Its cabin is a mix of leatherette, soft-touch plastics, and metallic trim. It’s an elegant combination that will easily fool you into thinking you’re driving a Lexus. If that’s not enough luxury, there are also satin silver or copper accents available for the dash, doors, and center console.

An eight-way power-adjustable driver’s seat is standard, as is a four-way power-adjustable passenger’s seat. The rear seats are also quite plush. They are even heated and ventilated on the Limited model. It’s worth noting that while the cabin is plenty spacious, the trunk is a bit undersized — especially for a sedan of this size. It only offers around 10 cubic-feet of storage space.

Every Mirai come standard with a 12.3-inch touchscreen infotainment system complete with Apple CarPlay, Android Auto, and Amazon Alexa compatibility. GPS Navigation is also standard, as is a 14-speaker JBL sound system complete with a subwoofer. The 2021 Mirai can also be had with an available color heads-up display that projects driving data onto the windshield. There is also an available bird’s eye-view camera system that provides an aerial 360-degree view of the car’s surroundings. Finally, there’s an available digital rearview mirror that provides an obstruction-free video feed of the car’s rear. All together, the Mirai offers a bunch of nifty bells and whistles.

Pricing and Trim Levels: Surprisingly Affordable (for an FCEV)

In a press release issued in mid-December, Toyota declared that the Mirai XLE will have an MSRP of $49,500. That’s $9,050 less than the starting price of the 2020 Mirai. The more luxurious Limited model, however, will start at $66,000. While the XLE does better at the (hydrogen) fuel pump, the Limited is loaded with standard features. The higher trim includes the aforementioned 360-degree camera, heads-up display, and heated and ventilated front seats swathed in perforated synthetic leather.

The hydrogen-powered car market consists of only three cars. One of them, the Honda Clarity, can only be leased at the moment. The Hyundai Nexo is available for purchase and has an starting price of $58,935. That makes the Mirai XLE a relative bargain by comparison.

The fact that the 2021 Mirai’s availability is limited to California will certainly be a letdown for many. However, apart from that, the new Mirai is a viable and attractive option for Californians who like upscale EVs. Those making the jump straight from gasoline-powered cars will appreciate that the Mirai can be refueled in just five minutes. It also offers more range than most electric cars currently on the market. The Mirai may be a bit ahead of its time as a FCEV. However, if you’re willing to be an early adopter, you should find a lot to love about Toyota’s newest eco-friendly four-door. 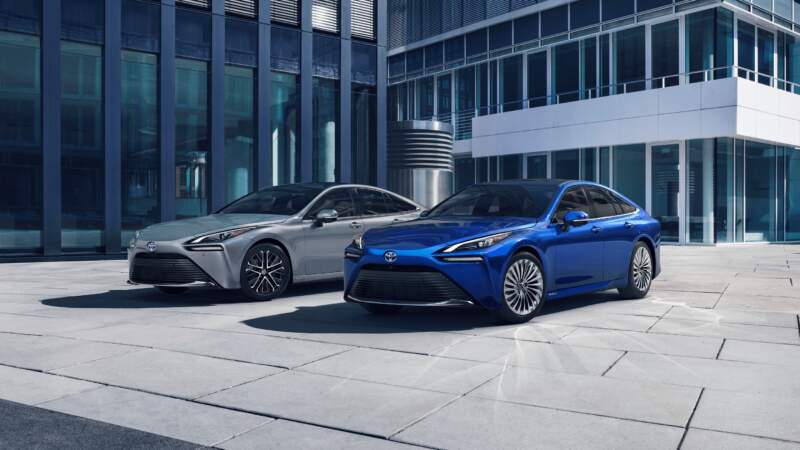