The 2021 BMW X1 is a small SUV with a big personality. The X1 comes with a standard 228-horsepower turbocharged four-cylinder engine that makes it a fun and peppy drive. With good fuel economy, crisp handling, a spacious cabin, and a large cargo area, the X1 has won numerous awards from major automotive critics. They continuously praise it for being one of the best compact SUVs on the market. In this article, we review the 2021 BMW X1 to help you determine if it’s the right SUV to meet your current needs.

BMW has made very few changes to the exterior of the X1 for the 2021 model. The LED fog lamps are no longer part of the optional “convenience” or “premium” packages. Beyond that, the outside appearance of the X1 remains virtually unchanged. Despite the lack of an exterior overhaul, the X1 remains a smart looking luxury SUV. Truth be told, it didn’t really need any changes. While not strikingly bold or original in its styling, the X1 still looks professional. It is still a BMW, after all. The X1 will impress wherever it is driven.

The X1 comes in only one engine and transmission pairing for 2021. However, that single option is an impressive 228-horsepower, turbocharged 2.0-liter four-cylinder engine paired to an eight-speed automatic transmission. The turbo four provides plenty of pick-up, as well as good fuel economy (more on that later). Front-wheel drive is standard, but an all-wheel-drive option is also available.

The AWD version is extra quick, able to got 0-to-60 mph within 6.3-seconds. That puts it among the fastest vehicles in its class. The optional AWD system favors the front wheels, though up to 100% of the engine’s output can, for brief moments in low-traction situations, move to the rear.

There are two trimlines for the 2021 BMW X1. The sDrive28i starts at $36,395 and an xDrive28i model is priced at $38,395. The sDrive28i comes with standard front-wheel-drive, while the pricier xDrive28i gets you all-wheel drive. That’s really the only difference, until you start adding additional feature packages.

Some critics suggest you take the $2,000 you’d spend to get AWD and spend it on the “M Sport package” instead. The sculpted sport seats that come with it have been singled out by reviewers as being far superior to the standard seats that come with the X1. There are also Convenience, Premium, and Luxury packages available that add more bells and whistles. Other upgrades you can add include 19″ wheels, leather interior, wireless charging, park assist, heated seats, a Harmon Kardon sound system, and upgraded interior trim materials. Like most other BMW models, the features on the X1 are more à la carte.

The X1’s interior is a high point, as it’s outfitted with premium materials throughout. Although the glovebox and bin hidden under the front seat has been criticized as being “cheaply made,” those complaints are rare. For the most part, the interior looks classy and feels luxurious.

The driver’s cockpit has a functional layout and even feels sporty. The gauge cluster is elegant and is easy to read. The driving position has been given high praise, as has the cargo area that is carpeted, trimmed in chrome, and been called “cavernous.” Indeed, the size of the X1’s cargo space is one of the SUV’s best features. Nearly 20 carry-on suitcases can fit in the X1 with the backseats folded down.

In terms of technology, the newest X1 comes with an 8.8-inch infotainment system that includes standard GPS navigation, Apple CarPlay (Android Auto is not offered yet), Bluetooth connectivity, SiriusXM satellite radio, a USB port, and a seven-speaker audio system. BMW provides a rotary knob on the center console to control all of the infotainment and technology features.

As for safety, the X1 has been awarded the top five-star rating from the National Highway Traffic Safety Administration.  However, it missed out on being a “Top Safety Pick” from the Insurance Institute for Highway Safety. That was due to its headlamps scoring poorly on the agency’s testing. Basic driver-assistance features are provided at no cost, but more advanced technology will requires you to pay more for optional upgrade packages. Standard safety features include forward-collision warning, lane-departure warning, and automatic high-beam headlamps.

BMW’s limited warranty and powertrain protection are average for its class. At least they sweeten the deal with three years of free scheduled maintenance. The X1 comes with a limited warranty coverage of four years or 50,000 miles. The powertrain warranty is good for four years or 50,000 miles. The complimentary scheduled maintenance is available for three years or 36,000 miles, whichever comes first.

As already mentioned, the 2021 BMW X1 has excellent fuel economy. The Environmental Protection Agency (EPA) estimates that the new X1 gets 24 MPG in the city and 33 MPG on the highway. That pegs the X1 as one of the most fuel-efficient vehicles in its category. The all-wheel-drive version of the X1 sees those numbers drop a bit, to 23 and 31, respectively.

The 2021 BMW X1 has a lot to recommend it. While it’s a smaller SUV, the X1 manages to contain a lot of interior space, including a large cargo area. The powerful engine and springy suspension make the X1 fun to drive on any terrain. The interior styling feels plush and comfortable. Add in great fuel economy and three years of no cost scheduled maintenance and the 2021 X1 is a very attractive option for anyone in the market for a small luxury SUV. 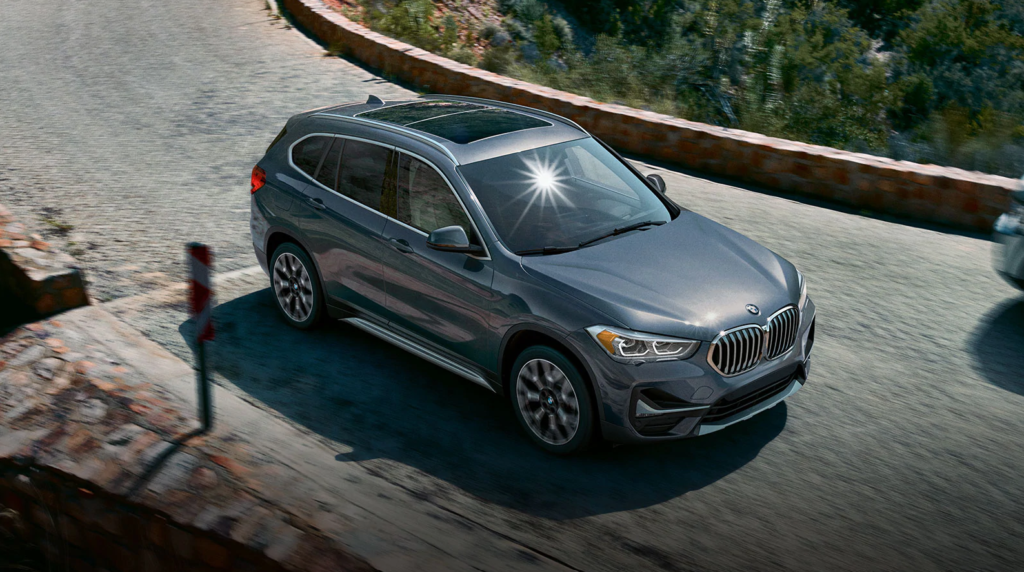