Inside The 2020 Volkswagen Atlas: A True Family Friendly SUV

When Volkswagen debuted the concept for its 2020 Volkswagen Atlas SUV at the 2018 New York International Auto Show, it caused quite a bit of excitement. Here was a crossover SUV that was roomy, had three rows of comfortable seats,c and looks stylish to boot. Finally, Volkswagen was going to deliver on the promise of a midsize SUV that is truly family friendly. That excitement was ratcheted up when photos of the production model leaked online in December 2018. With expectations through the roof, we thought we’d look to see if this vehicle can deliver on its promise.

The first reaction many people had to the 2020 Atlas was that it looked different than the original concept shown in New York. Reviewers called it “plain” and a “watered down” version of the concept. Other reviewers have called the exterior styling “boxy” and “chunky.”

From our perspective, though, the new Atlas still looks great. Sure, the flashy front LED headlight design is no longer there, and the front grille has been redesigned and tempered somewhat, but this is still a handsome SUV that is also practical. Just as you would expect from German engineers. The enormous wheels seen on earlier versions of the Atlas are also gone, which is a good thing. While interesting to look at, the giant wheels were not that useful considering this vehicle is mostly driven on suburban streets.

The “alpha of SUVs” (as Volkswagen is calling the 2020 Atlas) comes in four trimlines:

Trendline: In the base trimline, owners get an eight-speed automatic transmission and solid safety features like autonomous emergency braking and a rearview camera. This entry level model also comes with a 6.5-inch touchscreen infotainment system, Android Auto and Apple CarPlay compatibility, and 18-inch alloy wheels.

Comfortline: Move up to the Comfortline trim, and you get additional features such as blind spot detection and rear traffic alert, keyless entry and push button start, a power liftgate, remote car starter, and three zone electronic climate control.

Execline: At the top end is the Execline. As the title implies, this trimline is for people who have some money to spend, i.e. executives. With the Execline, you get everything already mentioned, plus park assist, a 360-degree camera, leather seats throughout, a premium audio system with 12 speakers and a subwoofer, a heated steering wheel, and the patented Volkswagen “digital cockpit” that comes with a detailed instrument cluster.

The Atlas comes with two engine options—a 235 horsepower four-cylinder or a 276 horsepower V-6. It also features an eight-speed automatic transmission that comes standard. There is an all-wheel drive option available with the V-6 engine. Reviewers appear to favor the V-6 engine as it provides a smooth and quiet ride. However, the Atlas engine isn’t the most powerful on the market today – taking nearly eight seconds to go from zero to 60 miles per hour in road tests. Though quick acceleration is not really a main reason you would purchase the 2020 Atlas.

Another quibble reviewers appear to have with the newest version of the Atlas is that the transmission can be slow to downshift. Switching to the standard “Sport” setting resolves this problem, but it is an issue that a lot of reviewers complained about. Despite the griping, the Atlas has good responsiveness and accurate steering. It’s also won praise for being a comfortable ride with a suspension that enables the vehicle to absorb even the biggest potholes.

Depending on the trimline chosen, the 2020 Atlas comes with a comfortable and well-equipped interior. In fact, the new Atlas wins praise for offering family-friendly interior space, and a third row that actually fits adults. It is the roominess of the Atlas, and its ability to haul people, that is likely to appeal to suburban families. A Pew Research study found that nearly four in ten American mothers have three or more kids, a number that often requires a third row. And one with real seats, not pop-up chairs crammed into a cargo area or trunk.

In addition to its spaciousness, the 2020 Atlas gets high marks for having a straightforward layout of its controls, plenty of cupholders, and an uncomplicated and functional design. Again, it’s exactly what you would expect from pragmatic engineers in Deutschland. Interior materials are durable but not the soft-to-the-touch buttons and plastics seen in some competing SUVs.

The digital cockpit deserves special mention. It replaces a more typical gauge cluster with a 12.3-inch fully digital display. The infotainment touchscreen is responsive and there are physical knobs and buttons for controlling additional climate and infotainment settings. Standard Apple CarPlay and Android Auto is a plus. Overall, the digital cockpit is a feature unique to Volkswagen that is a big draw to consumers who appreciate bells and whistles.

The Atlas is an SUV and the largest vehicle that Volkswagen manufacturers. As such, the 2020 Atlas, with its base engine and front-wheel drive, gets 22 miles per gallon when driving in the city and 26 mpg when moving on the highway. While not as good as an electric or hybrid vehicle, those fuel economy numbers are among the best for the class. Atlas models with the V6 engine get a more typical rating of 17 miles per gallon of city driving and 24 miles per gallon on the highway.

If you are searching for an SUV that can fit your whole family comfortably, you should consider the 2020 Volkswagen Atlas. It has been designed with large families in mind. With third row seating that is spacious and can fit both children and adults, the Atlas is a premium people mover. Excellent fuel economy and ample safety features are other reasons for families to appreciate the 2020 Atlas. It’s a practical option for owners who spend most of their time shuttling kids to soccer fields, dance practice, and other suburban activities. 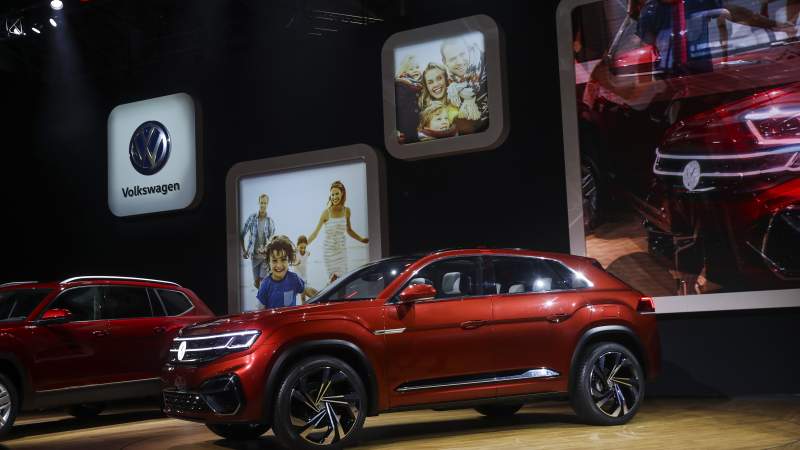