Inside the 2020 Subaru Crosstrek: Capable, Affordable, and Safe

The Subaru Crosstrek is extremely popular. How popular, you ask? Subaru has sold over 750,000 Crosstreks since the model first hit dealer showrooms in 2012. At that rate, there’s a chance Subaru could sell over one million Crosstreks in just 10 years. The Crosstrek is so popular largely thanks to its affordability, capability, and wealth of standard safety tech. The 2020 model was built following the same formula. It’s without a doubt one of the best subcompact SUVs on the market today. Here’s why.

The 2020 Crosstrek was slightly updated for 2020. The most noteworthy work happening under the hood. Engine stop/start is now standard for Crosstreks equipped with CVTs. Furthermore, all CVT-equipped models now feature selectable drive modes. Other additions for 2020 include standard automatic climate control and redesigned taillights.

The Crosstrek is basically just a taller Subaru Impreza station wagon. Unfortunately, the current-generation Impreza isn’t much of a looker. The Crosstrek looks downright boring when compared to the classy looking Mazda CX-30 and the boldly designed Hyundai Kona and Kia Soul. However, it does look a lot more rugged thanks to its impressive ground clearance — a whopping 8.7 inches. Its station wagon origins also means that the Crosstrek doesn’t look nearly as claustrophobic as some competitors.

The 2020 Subaru Crosstrek doesn’t offer a ton of power in both its petrol-powered and plug-in hybrid forms. The 2.0-liter four-cylinder boxer engine produces a piddly 152 horsepower and 145 lb-ft of torque. Power is sent to all four wheels via a CVT or a six-speed manual transmission. Despite making 148 horsepower, the hybrid is the quicker of the two Crosstreks according to MotorTrend, which recorded a 0-to-60 mph time of 8.3 seconds. Unlike the gas-powered model, the hybrid Crosstrek is only available with a CVT.

There is some good news, though. Subaru appears to have listened to journalists and consumers and has added a “Sport” trim equipped with a 2.5-liter boxer-four good for 182 hp to the 2021 Crosstrek lineup. Stay tuned for more information on that upcoming model.

Despite being a bit underpowered, reviewers generally have good things to say about the Crosstrek’s on-road performance. The sharp steering has received praise, as has the suspension, which was highlighted for both soaking up bumps in the road and enabling the SUV to tackle “tight twists and turns.”

While the Crosstrek leaves something to be desired between the white lines, it excels off-road thanks to its standard all-wheel drive, high ride height, and “X-Mode” — which adds hill descent control and tweaks to provide maximum traction. MotorTrend shook down a 2018 Crosstrek at a Los Angeles-area off-road park and came away extremely impressed.

The 2020 Subaru Crosstrek has three different fuel economy ratings: one for each transmission and one more for the hybrid. Of the three, the manual Crosstrek does poorest at the pump, returning an EPA estimated 22/29/25 miles per gallon (city, highway, combined). The CVT is much more fuel efficient and offers an estimated 27/33/30 MPG. As expected, the hybrid leads the pack with an estimated 35 MPG combined. The plug-in can also travel for 17 miles on electric power only.

What’s Inside: Room to Stretch

The Crosstrek is one of the only models in its class that could reasonably seat five adults, albeit smaller ones. In their review, CarBuzz noted that the Crosstrek offers plenty of legroom in both rows, even when equipped with the optional moonroof. However, they did say that the rear seats could use a bit more headroom. While Subaru has been dinged in the past for its barebones interiors, the 2020 Crosstrek actually looks pretty smart. It offers some luxury features standard on higher trim levels, including heated front seats, a heated and leather-wrapped steering wheel, a leather-wrapped shifter and leather-trimmed seats.

The 2020 Crosstrek comes standard with a 6.5-inch touchscreen infotainment system, with Android Auto and Apple CarPlay. An 8.0-inch touchscreen is standard on higher trim levels, as is 4G LTE WiFi capability and a six-speaker audio system (a four-speaker system is standard). Optional tech features include GPS navigation and an eight-speaker Harman Kardon sound system. While the Crosstrek doesn’t offer a ton of infotainment tech, standard Apple CarPlay and Android Auto should be more than enough to satisfy most consumers.

Where the Crosstrek really shines is on the safety front. All models optioned with the CVT come with EyeSight, Subaru’s suite of safety technology and driver’s aids. EyeSight consists of adaptive cruise control, pre-collision braking, a lane departure and sway warning system, and lane keep assist.

High beam assist is standard on higher trim levels, as is a blind-spot detection system, rear cross-traffic alert, and reverse automatic braking. The Crosstrek offers an incredible amount of safety tech for its class and price point. At higher trim levels, the Subaru even offers a slate of tech that’s competitive with what luxury automakers like Volvo and Lexus have on offer.

The 2020 Subaru Crosstrek comes in four trim levels: Crosstrek, Crosstrek Premium, Crosstrek Limited and Crosstrek Hybrid. All three non-hybrid trims have the same engine, but the Crosstrek and Crosstrek Limited come equipped with a six-speed manual transmission standard. The CVT costs $1,350 extra, but it does add EyeSight and increased fuel economy. The Crosstrek starts at $22,145, but the CVT options its price to $23,495. The Premium stickers at $23,195 and comes in at $24,545 with the CVT. The Premium offers heated front seats, a leather-wrapped steering wheel, and 4G LTE Wifi standard.

The Limited trim level comes standard with the CVT and all of the luxury features of the Premium trim. It also adds a leather-wrapped shifter knob, power-adjustable driver’s seat and leather-trimmed upholstery with contrast orange stitching. An 8.0-inch touchscreen is standard, as is a 6.3-inch color information screen, which is installed in the dash. This and the Hybrid are the only trims where the eight-speaker Harman Kardon sound system can be optioned. The Limited trim starts at $27,395.

At the top of the totem pole sits the Crosstrek Hybrid with a starting price of $35,145. The hybrid is identical in terms of features to the Limited trim.

So, where’s the sweet spot in the lineup? Our vote goes to the Premium trim equipped with the CVT. For just under $25,000 you get a ton of safety tech and some pretty fancy luxury features. The Limited is also not a bad option if you crave a bit more tech and a more eye-catching interior. Although its fuel economy is impressive, the Hybrid’s high price and lack of trim level-exclusive features make it tough to recommend.

It’s easy to see why so many people have snapped up the Subaru Crosstrek. Simply put, you get a lot for the money. The base Crosstrek is a capable off-roader with just enough on-road refinement and space for both people and cargo. Yes, it lacks a bit of luxury and infotainment tech, but it blows the doors off the competition when it comes to safety and driver’s aids. If you’re in the market for a subcompact SUV on a budget, then definitely check out the 2020 Subaru Crosstrek. 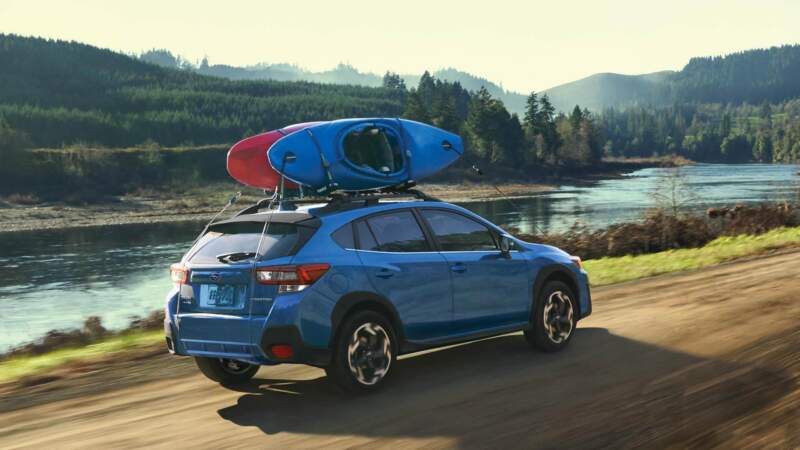