Inside the 2020 Jeep Compass: A CUV With The Soul Of An Off-Roader

The 2020 Jeep Compass is compact and stylish. That suggests it’s built strictly for city streets. However, it’s actually one of the most capable off-roaders in the ultra-crowded compact crossover class. With available all-wheel drive that features low-range gearing, hill descent control, and a terrain management system, the Compass is surprisingly versatile. In addition to its off-road credentials, the Compass also packs a good amount of standard tech inside. (Unfortunately, many of those options are not standard). Topping everything off is an attractive starting price — at lower trim levels, at least.

That all makes it sound like the Compass should be at the top of its class. However, it’s actually more of a middle-of-the-pack option. There’s the powertrain options that reviewers are quick to criticize. The top-tier trim levels get pricey in a hurry. And there’s a lack of standard safety features compared to competitors. The 2020 Jeep Compass is certainly a compromise, but whether it’s one worth making varies by the buyer.

New For 2020: More Safety For The Sport Trim

One thing to note, though. On the Compass Sport, the Advanced Safety Group can only be optioned alongside the Safety and Security Group Package. It’s also only available with the optional six-speed automatic transmission, itself a $1,500 optional extra.

Jeep deserves some praise for making so much safety tech available on the cheapest Compass. However, it’s still worth noting that many rivals offer these same features as standard. In fact, the Compass is far behind the competition when it comes to standard safety tech and driver’s assistance aids. It offers only a backup camera and hill start assist on the bare bones model.

Two-tone color schemes are incredibly popular on crossovers. The Jeep Compass proves why. It looks simply stunning with a two-tone paint job — and a bit basic without, especially the lower trim levels. Paint jobs aside, the Compass looks like a smaller Cherokee. That means it has a modern, cleanm and inoffensive design. The Trailhawk edition is the best-looking Compass around, thanks in large part to the tow hooks and its higher ride height. (The 4×4 models have 8.5 inches of ground clearance while 4x2s have 7.8 inches).

Engine and Performance: Disappointing On the Road, Impressive Off It

The 2020 Compass is only available with a 2.4-liter four-cylinder engine. It makes 180 horsepower and 175 lb-ft of torque. A six-speed manual transmission is standard, but two automatic transmissions are on offer: a six-speed and nine-speed. Front-wheel drive is standard on most trims, but all-wheel drive is available on all trim levels except for the Sun & Wheel. The six-speed manual is available on both FWD and AWD trims, but the six-speed auto is only available with FWD models. The nine-speed auto can only be had on higher trim levels equipped with AWD.

Reviewers don’t have the nicest things to say about the Compass’ powertrain options. Regardless of the transmission, the consensus is that the Jeep is slow and underpowered. Some reviewers even called out the available nine-speed auto for its sluggish downshifts and upshifts that skip gears. The Compass may have some good things going for it, but the engine isn’t at the top of that list.

Bad news for purists. The slowest Compass is the FWD model equipped with the six-speed manual, which takes a whopping 10 seconds to sprint from 0-to-60 mph. There’s some good news too, though. The AWD Compass with the six-speed manual can hit the 60-mph mark in 8.5 seconds. Blame an underpowered engine and a curb weight that starts at 3,184 pounds for the Compass’ acceleration woes. While Car & Driver called the crossover “well controlled, solidly planted, and capable on the road,” other outlets have criticized the Compass for its body roll, tendency to understeer, and uneven steering feel.

What all reviewers universally agree on is the Compass’ off-roading prowess. The traction management system on AWD models features three modes: snow, sand and mud. The Trailhawk trim adds a fourth mode (Rock) which keeps the Compass in first gear and channels torque to whatever wheel has traction. That, plus the ability to lock the AWD system in a low-gear range and hill descent control, place the Compass a cut above its competitors when the pavement disappears.

According to EPA estimates, the Compass averages 22/31/25 mpg (city, highway, combined) on all powertrain setups, save for the AWD and nine-speed auto combo. Surprisingly, more gears actually means less efficiency, a phenomenon that can be explained by the higher ride height and weight of the AWD system. Still, the AWD nine-speed Compass averages a nearly identical 22/30/25 mpg split. These numbers are pretty dismal, especially when compared to the gas-sipping Toyota Rav4, Honda CR-V, and Ford Escape. Then again, those competitors won’t handle nearly as well off-road, so there’s always a trade-off to be made.

Jeep’s designers clearly weren’t feeling risky when they designed the Compass’ cabin. That’s not necessarily a bad thing, though. There is plenty of legroom for both front and rear passengers. There’s even a decent amount of headroom for those in the second row. Cloth seats are standard, while premium vinyl and leather seating are standard on higher trim levels. Available luxury features include eight-way power-adjustable front seats, a sunroof, and power liftgate.

The 2020 Compass has 27.2 cubic feet of storage space behind its rear seats. Folding said seats down increases that figure to 59.8 cubic feet. Both are on the smaller side compared to rivals, but there are a variety of small storage cubbies inside. Additionally, the front passenger seat folds flat to make stowing bikes and other long objects easier.

The Compass comes standard with a seven-inch touchscreen infotainment system, Apple CarPlay, Android Auto, dual-zone climate control, and a push-button start. Available tech includes a larger 8.4-inch touchscreen, GPS navigation, a proximity-based keyless entry system, and a nine-speaker Alpine sound system. It’s worth pointing out that Jeep’s Uconnect infotainment system is widely considered to be one of the industry’s best.

As mentioned, the Compass charges a premium for safety tech and driver’s assistance aids. With the exception of the Sun & Safety trim, all of the Jeep’s advanced safety tech and driver’s aids have to be optioned a la carte. This is a bad look, especially considering how automakers like Subaru equip even their base models with advanced safety technology. However, if you simply need to own a Jeep and don’t mind paying extra, the Compass can pack in plenty of safety features.

Pricing and Trim Levels: A Compass for Every Taste

The 2020 Compass is available in a mind-boggling nine trim levels, almost half of which are appearance packages. The base model Sport trim checks in at $22,280 (FWD, six-speed manual), and the range-topping High Altitude stickers at $31,145 (FWD, six-speed auto). The most notable trims between these two are the Sun & Safety and Trailhawk.

The Sun & Safety model deserves the spotlight because it can be had with all of the available safety tech and driver’s aids (plus AWD) for $28,820. (The FWD Sun & Safety model starts at $27,320.) In addition to being the most capable Compass off-road, the Trailhawk trim adds the larger 8.4-inch touchscreen and premium cloth leather-trimmed seats. The Trailhawk has a sticker price of $29,850.

The Compass is competitive at lower trim levels, but sticker shock sets in as you move up the range. Simply put, other automakers charge less and offer more with their competing options — especially on the luxury and safety fronts. Then again, riding behind that iconic Jeep grille is worth it for some off-road fans.

The 2020 Jeep Compass asks buyers to trade luxury, on-road performance, fuel economy, and standard safety tech for off-road capabilities. Those who plan to do the majority of their driving in-town and on the highway will likely find this compromise too tough to stomach. You will probably want to look elsewhere for a compact crossover. However, if you crave a bit of adventure and are on a budget, you should give the Compass a long look — especially the Trailhawk version. 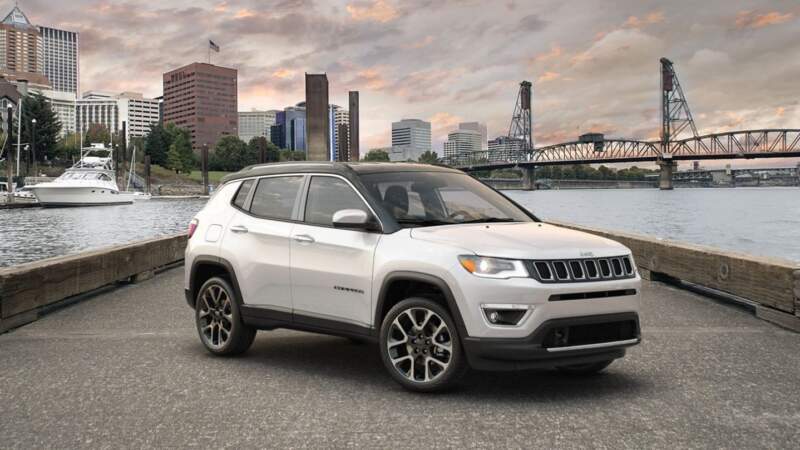