Inside The 2020 Honda Passport: A Roomy And Comfortable SUV

When it comes to two-row crossover SUVS, the Honda Passport has size on its side. It’s among the biggest and roomiest on the market today. While the Passport may not be the most stylish SUV available, it makes up for its lack of visual appeal with a plethora of standard driver assist features. Highlights include adaptive cruise control and automated emergency braking.

The Passport also gets high praise for being extremely comfortable and having ample storage space for cargo. Additionally, every Passport model is powered by a V6 powertrain engine that truly delivers. Consumers who want spaciousness, sportiness, and value for money are sure to love the 2020 Honda Passport.

The biggest knock on the newest Passport is that it’s the ugly duckling of mid-size SUVs. We think that characterization is a little harsh, though. Rather than ugly, we would describe the exterior styling of the 2020 Passport as bland. This is mainly because the engineers at Honda made few (if any) changes to the vehicle’s exterior. Instead, they seem to have focused entirely on making the interior of this SUV as comfortable, spacious, and functional as possible.

The outside of the 2020 Passport looks largely like previous models. Anyone who is already familiar with Honda SUVs won’t be too disappointed. However, if your main criteria when buying a vehicle is its exterior appearance, then the Honda Passport may not be for you. It does the job just fine, it just doesn’t turn many heads while doing it.

Under the hood, the 2020 Passport remains largely unchanged from previous iterations. The latest Passport contains the same 280 horsepower, 3.5-liter V6 engine, paired with a nine-speed automatic transmission, that is found in previous models. This engine also powers the Honda Pilot. This isn’t necessarily a bad thing, though, as this engine is more than capable, both on pavement or offroading.

The 2020 Passport comes with standard front-wheel drive. If you want all-wheel drive, it can be added as an optional feature — for a price, of course. It’s worth noting that the Passport can tow up to 5,000 pounds. Some critics have complained that the Passport has a rough ride when it ventures off-road. Still, the Passport provides quick acceleration on highways. The steering has been described as “pleasing” and the overall drive has been praised as “nimble and agile.”

The 2020 Passport comes in four trimlines and price levels. The Sport trimline is the cheapest at $31,990. The EX-L starts at $36,5410. The Touring edition will set you back $39,280, and the top level Elite model will cost at least $43,780. The AWD system comes standard on the Elite version, which also includes little luxuries like wireless device charging, heated steering wheel, and rain-sensing windshield wipers.

In terms of value for money, the mid-tier EX-L trim level seems to be the best bet. It comes with many standard features but remains under $40,000. Those standard features include an 8.0-touchscreen with Apple CarPlay and Android Auto integration, blind-spot monitoring, heated front seats, leather-appointed upholstery, a power liftgate, and rear cross-traffic alert. The optional all-wheel drive can be added for an extra $1,900.

The interior is where the 2020 Passport really shines. Not only are the seats and upholstery comfortable, but the controls are well organized. Like many modern cars, the Passport favors touchscreens over knobs. The front seats deserve to be singled out with special praise. They are wide and comfortable, with armrests that can be adjusted for optimal comfort. The back seat is also roomy and can comfortably seat adults.

In fact, the Passport can transport up to five people of all sizes quite nicely. In terms of storage, there’s 41 cubic feet of storage behind the rear seat. That can hold up to 15 suitcases, according to Honda. That’s a huge amount of cargo space! Folding down the back row unlocks even more storage capacity, at 78 cubic feet and the ability to carry 33 bags total. Cubby storage bins abound throughout the cabin. When it comes to room and space, it is hard to beat the Passport.

The base model Sport edition comes with a basic five-inch display for its infotainment system. While it includes necessities such as Bluetooth, the three other trims each comes with an eight-inch touchscreen that is compatible with Apple CarPlay and Android Auto. However, those who want a 115-volt outlet, built-in navigation, an upgraded audio system, a Wi-i hotspot, or wireless phone charging will have to buy the top-tier Touring or Elite models.

In terms of safety, the Passport earned a five-star crash-test rating from the National Highway Traffic Safety Administration (NHTSA). It comes with a number of great standard safety features, including forward-collision warning, automated emergency braking, lane-departure warning and lane-keeping assist, and adaptive cruise control. These standard safety features are available in all trimlines of the Honda Passport. The SUV also earned strong marks from the Insurance Institute of Highway Safety, scoring mostly top level “Good” marks.

Honda provides a decent limited warranty, but its powertrain coverage is lacking compared to other SUVs in its class such as the Hyundai Santa Fe and Kia Sorento. The 2020 Passport comes with a limited three year,  36,000 mile warranty. The powertrain warranty covers five years or 60,000 miles. It’s fairly standard. Unfortunately, the Passport has no complimentary scheduled maintenance.

When it comes to fuel economy, the 2020 Honda Passport has two different ratings from the Environmental Protection Agency (EPA). The front-drive model gets up to 20 miles per gallon in the city and 25 MPG on the highway. Passports with all-wheel drive have slightly reduced ratings, getting 19 MPG in the city and 24 MPG on highways.

The Not So Good

The 2020 Honda Passport is an SUV for people who value comfort, spaciousness, and safety. It might not the sexiest or most powerful mid-size SUV on the market. However, it’s still an excellent vehicle for people who plans to use the Passport mostly in the city, with big and busy families. There’s ample room for sports bags and luggage. The fact that the latest Passport comes well-equipped for under $40,000 makes this SUV good value for money and worth a look. 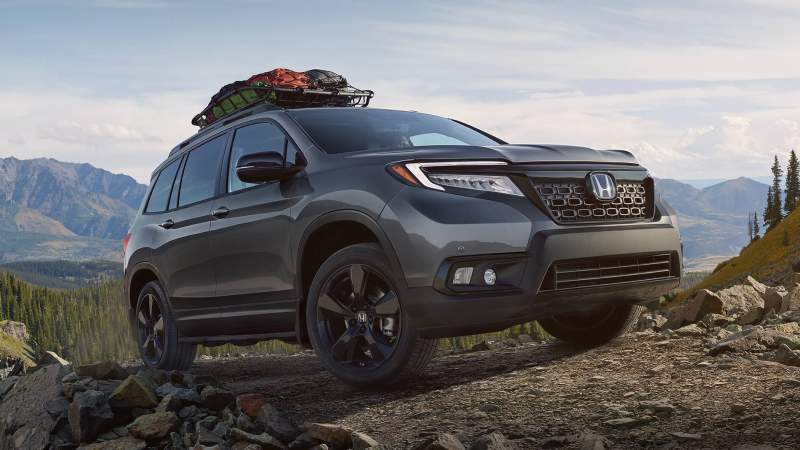