Inside The 2020 Honda Civic: A Car That Keeps On Truckin’

The 2020 Honda Civic contains just enough new features and technology to keep things interesting. Make no mistake though, the Civic remains largely intact for the 2020 edition. It retains its trademark fun driving experience and practical interior. Both are traits that have made the Civic a perennial bestseller since it first debuted way back in 1972.

While there have been many generations and versions of the Civic over the years, the 2020 edition remains one of the very best compact cars on the market. It comes in a variety of versions for you to choose from – sedan, coupe, and hatchback. Every model is efficient and affordable. Loaded with the latest safety features and available with an optional turbocharged engine, the newest Civic is worthy of the accolades it has received from reviewers all over the world.

If there is one knock on the Honda Civic (and it’s a little one), it’s that the exterior styling in most versions has not been upgraded for 2020. The sedan and coupe versions both got an update for 2019, but remain unchanged for 2020. The grille, headlights, front and rear bumpers, and wheels remain nearly identical to the 2019 models.

The one exception is the hatchback version of the Civic, which gets some not-so-subtle styling updates, new features, and rearranged trim levels. The EX hatchback also comes with a six-speed manual transmission, previously available only on Sport hatchback models. But, in general, if you were hoping for a completely redesigned Civic for 2020, you’re likely to be disappointed. That being said, the 2019 version was plenty good. And so is the newest Civic.

Additionally, the Civic provides a smooth ride, responsive steering, and athletic driving dynamics. In short, it’s a joy to operate. The ride quality is just about perfect. Quick, well-weighted, and surprisingly responsive, the Civic really moves. Simply put, it’s a lot of fun to drive. Those looking for even more fun should consider the Sport versions, which feature even quicker steering.

The 2020 Honda Civic comes in five different trimlines that range in price from $20,680 for the basic LX model up to $28,980 for the top end Sport Touring version. In between, you have the Sport edition for $22,380, the EX model for $24,430, and the Touring Civic for $28,080. These trimlines don’t include the Honda Civic Si or Honda Civic Type R — models that really are separate cars from the traditional Civic being reviewed here.

As for which of the available trims is best, we would recommend the Sport edition. It’s still reasonably affordable at $23,680, but which comes loaded with cool features, including a manual transmission that is standard. It also has a more powerful 180-horsepower version of the turbocharged four-cylinder engine. For a little more money, the Sport edition is a big step up.

The newest Civic manages to balance style, comfort, and practicality in equal measure. Which is exactly what you would expect from Honda. Despite being a compact car, the Civic’s interior is surprisingly roomy and offers sufficient storage space. Even the entry-level model has leg room to spare. The Civic should appeal to every type of small-car shopper.

Cleverly designed storage cubbies can be found throughout the cabin. The Civic’s trunk is one of the biggest in its class. Of course, if you want more cargo area, you could always opt for the hatchback model. Tools, gizmos, and gadgets abound and are well placed to maximize use and helpfulness.

With its intuitive touchscreen interface, the 2020 Civic is sure to appeal to young drivers and anyone who considers themselves a technophile. The entire infotainment system is much improved in the newest Civic, owing to a long-awaited volume knob for the audio system and hard buttons for certain functions.

The top-tier Touring sedan boasts an infotainment system that has a 7.0-inch touchscreen, including navigation, SiriusXM satellite radio, and Apple CarPlay and Android Auto connectivity. The front compartment has two USB ports and a single 12-volt outlet. Sadly, rear-seat passengers are left a bit unconnected. Not a single USB port or 12-volt outlet makes its way to the rear seats. A small quibble, we admit.

In terms of the warranty, you can expect the Civic to come with a limited warranty of three years or 36,000 miles. The powertrain warranty coverage is for five years or 60,000 miles. Sadly, the Civic does not come with any complimentary scheduled maintenance – a small blemish when compared to competing cars that do provide no cost scheduled maintenance, like the Toyota Corolla.

While not an electric vehicle (or even a gas/electric hybrid), the Civic nevertheless has some strong fuel efficiency ratings. Both Civic four-cylinders sip fuel frugally. Interestingly, the more powerful turbocharged engine manages to return slightly better fuel economy than the base level 2.0-liter engine found in Civic sedans and coupes. Expect the sedan to give you 29 miles per gallon when driven in the city, 37 mpg on the highway, and a combined 32 mpg.

The 2020 Honda Civic gets a lot of things right. It’s a fun, peppy, and responsive car that comes loaded with the latest technological bells and whistles. There’s also enough safety features to keep driver and passenger secure. While there are a few things that could be improved upon, such as the exterior styling and a scheduled maintenance package, overall these are small complaints that should not detract from the overall caliber of the newest Civic. With the 2020 model, Honda ensures the continued longevity of this reliable nameplate. 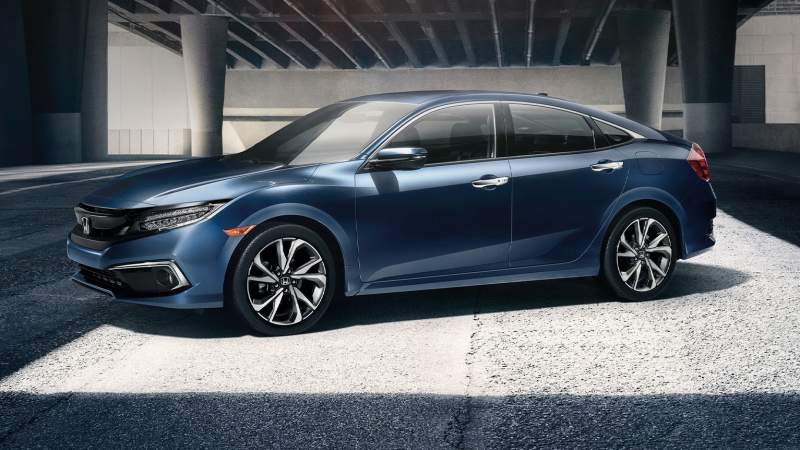