Inside The 2019 Volvo XC40: The New Standard For Crossovers

The XC40 is Volvo’s newest crossover — and perhaps its most important model. Volvo has a good chance at topping 100,000 sales in the United States for the first time since 2007, and that’s because the XC40 has sold so well. Drivers are flocking to Volvo’s all-new crossover, and we learned why after the automaker let us spend a week behind the wheel of a 2019 XC40 T5 Momentum — the base trim model of the XC40 lineup.

How It Looks: Hip To Be Square

Volvo isn’t known for its youthful designs, but the automaker made an exception here. Plastic cladding on the wheel arches, a two-tone color scheme (that white contrast roof is a $300 extra) and the quirky Swedish flag affixed to the hood indicate that the XC40 is indeed targeted at a younger audience. Volvo has paired these youth-friendly features with a body style that’s, well, a bit square. Most luxury subcompact CUVs feature curvy designs and rooflines that drop off at extreme angles. The XC40 is boxy, not curvy, and its roofline is mostly flat before tapering off ever so slightly where it meets the rear hatch.

While the boxy design reminds us of Volvo’s frumpy past, we’re actually big fans of it. The look is a breath of fresh air in a segment where automakers are increasingly putting aerodynamics in front of functionality. While we loved the boxy look of the XC40, we did have beef with its thick rear haunches. Those oversized C-pillars and their lack of glass made parking and changing lanes difficult at times.

What’s Under The Hood: Trading Gas Mileage For Fun

Volvo estimates the XC40 T5 will do 0-to-60 mph in 6.2 seconds, and while we can’t confirm that time, we can say this little CUV definitely has some giddyup. There’s hardly any noticeable torque steer or turbo lag off the line, and the XC40 is  adept at passing at highway speeds, with the eight-speed transmission seeming to always be in the right gear and shifts smoothly. Taking the 2019 XC40 on winding back roads is fun, but we quickly ran up against the little Volvo’s limitations when the bends got sharp and the body roll and understeer came out. While the driving modes are adjustable, the suspension is not, but the default suspension setup was able to soak up just about all of Chicago’s potholes.

To unlock the XC40’s full performance potential, you need to toggle the “Dynamic” drive mode, which increases throttle response, adds a bit of weight to the steering and causes the transmission to hold gears for longer. That said, the majority of our trip to Dubuque, Iowa, from Chicago (almost 400 miles in all) was spent in Comfort mode, which is designed for everyday driving. However, the XC40 averaged an not-great 22.1 mpg combined and 16.1 mpg in limited city driving.

Those figures are far from the official EPA estimates of 23/31/26 mpg (city, highway, combined). This was a shock given the EPA estimates and the Volvo’s light-ish 3,854-pound curb weight. To be fair, those figures could have been boosted had we engaged the automatic stop/stop feature more often and driven more frequently in Eco mode.

What’s Inside: Tech-Savvy, Elegant And Short On Cargo Space

Options helped push our tester’s price tag to $44,315. The majority of them added additional safety and driver’s convenience technology, such as a 360-degree surround-view camera, adaptive cruise control, a blind spot information system, cross traffic alert with auto braking and Pilot Assist. Pilot Assist allows for limited self-driving by combining adaptive cruise control with lane-keep assist. Note that in order to use the system, your hands must be in contact with the wheel.

Pilot Assist kept the XC40 safely between the lane lines, provided the road didn’t curve. If it did, the steering would get a bit squirrely as the system struggled to keep the car in the lane’s center. Unless you do a ton of highway driving (Pilot Assist can handle stop-and-go traffic) we recommend passing on Pilot Assist, especially on the Momentum trim where it comes as part of the $1,4000 Premium Package.

Our tester also featured a 600-watt 13-speaker Harman Kardon sound system, a laminated panoramic moonroof, heated front seatsm and a heated steering wheel. These were nice to have, but they weren’t what made the cabin feel classy. That came from the its design. Instead of wood inlays, Volvo chose to run a textured strip of aluminum through the middle of the dash and into the door panels. There’s a conspicuous lack of buttons, which gives the center stack and steering wheel a clean and uncluttered appearance. The XC40’s interior can best be described as uncomplicated and modern.

With the rear seats up, the XC40 offers 20.7 cubic feet of storage space, and folding them down pushes that figure to 47.2 cubic feet. Those figures would have been smaller had Volvo not installed the sound system’s subwoofers in the dash. Still, the XC40’s max storage space lags behind just about every competitor in its class. Volvo did outfit the XC40 with a handful of creative large door pockets and bag hooks for the rear cargo area and glove compartments.

Volvo charges extra for some of its most creative workarounds though, like the storage compartment under the driver’s seat and the rear folding cargo floor, which are part of the Premium Package. The good news is that a lack of storage space doesn’t mean passengers will feel cramped. There’s plenty of leg and headroom in the front and back, and the seats are more supportive than supple but they are plenty comfortable, although driver’s may find themselves feeling a bit stiff after a few hours behind the wheel.

The XC40’s other big interior issue is its 9-inch infotainment screen, which can oftentimes be slow to respond or load the rearview camera. A large part of this has to do with just how capable the system is: You can do just about everything from it. And while the XC40 features high-quality materials throughout its cabin, some high-touch pieces like the air vents feel like they were made with cheaper plastic.

Final Thoughts: This Is The One You Want

The 2019 Volvo XC40 comes in three trims: Momentum, R-Design and Inscription. The R-Design is the performance-lite option and features a sport-tuned suspension, while the Inscription is at the top of the totem pole in terms of standard luxury and tech features. All three trim levels are priced competitively, with the R-Design and Inscription (with the T4 engine) checking in at $36,200 and $38,995, respectively. For most cars, the sweet spot really is a trim level somewhere in the middle. With the XC40, that’s not the case.

Since the XC40 is such a good buy at its lowest price level, it’s hard to to recommend buyers look elsewhere. You can even own one on a subscription plan, although Care by Volvo is reportedly so popular that the automaker has had to put drivers on a waitlist. Of course Volvo’s baby crossover isn’t perfect. If you’re in the market for performance, then you need to consider the Jaguar E-Pace and Mercedes-Benz GLA-Class. If you want to store a ton of cargo then the BMW X1 should be high on your list. If you’re on a tighter budget, then your search should probably start with the Infiniti QX30.

The XC40 doesn’t lead its segment in any one section. But the complete package, and its price tag, is perhaps the most competitive in its class. If you’re in the market for a luxury subcompact crossover, we strongly recommend giving the 2019 Volvo XC40 a test drive. 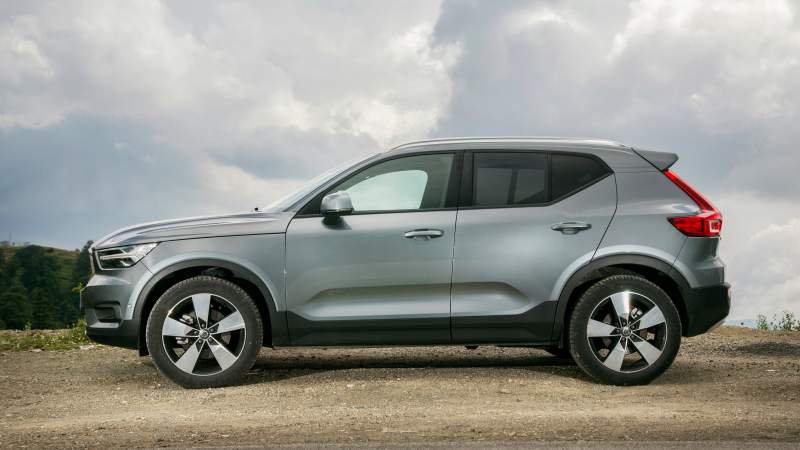