Inside The 2019 Dodge Challenger: A Modern Muscle Car For Old-School Fans

Some cars you either love or hate, and the 2019 Dodge Challenger is one of those cars. There’s not likely to be many of you who simply think, “Meh, I guess it’s pretty okay.” Thankfully for Dodge, an awful lot of us love muscle cars like the Challenger. It’s hard to believe the Challenger has been around in one way or another since 1969, and today’s version of the car is probably as cool and desirable as it’s ever been.

Although a lot of enthusiasts inevitably prefer intact, restored, or restomod muscle cars from the 60s and 70s, the new Challenger is a model even those in love with classic muscle cars can appreciate. And that’s because the 2019 model looks very much like a 1970 Challenger, but with all the underpinnings, performance, and convenience features of a brand new car. If you haven’t checked out a Dodge Challenger lately, here’s a bit of what you’ve been missing out on.

If you didn’t like Challengers from the early 1970s, you’re unlikely to fall for the exterior styling charms of the 2019 model. But if you do love that kind of retro muscle car look, it’s hard to do anything other than smile when you see a current Challenger. While some of the Challenger’s main rivals have updated looks that are taking them closer to being modern day sports cars, the Challenger continues to positively revel in its retro charm.

What you don’t get from pictures, though, is the sheer size of this beast. This is a big, bulky, wide, brash and no-nonsense muscle car that makes absolutely no apology for what it is. It only has two doors, of course, but each one is nearly as big as two sedan doors. And while some performance models like the latest Caddy CTS-V have toned-down the performance boasts of their styling a little recently, the Challenger shouts about what it can do from the rooftops.
Whatever trim level or color you choose, the 2019 Challenger is dressed up and still a genuine head-turner. It’s one of those cars that sensible folks will outwardly frown about in utter disdain — it’s big, loud, and unnecessary, they will say — but deep inside they are likely jealous, wishing they had one of their own to drive.

If you want choice, the 2019 Dodge Challenger delivers in a very big way. There are now six different trim levels, five different engines, 14 exterior colors, eight upgrade packages, and 13 different seats. And that’s before we even get to things like alloy wheels and the fact you can now have front- or all-wheel-drive Challengers. Trim levels start with the SXT and then go to the GT, R/T, R/T Scat Pack, SRT Hellcat, and the SRT Hellcat Redeye. Basically, you can find a Challenger with as much (or as little) extra flair as you want.

First up is a 3.6-liter V-6 that puts out 305 horsepower and 268 lb.-ft. of torque, which would probably be the most powerful engine in a lot of modern, so-called performance cars. Here in the Challenger lineup, though, it’s only the appetizer. That still-impressive amount of power is then sent to the rear (or all four) wheels through an eight-speed automatic transmission. It’s a great powertrain with plenty of power, but surely a beast like the Challenger deserves a V-8?

Of course, if you know anything about Dodge over the last few years, you’ll know where we’re heading next, and that’s to the SRT Hellcat. The 6.2-liter supercharged V-8 now delivers 717 hp and 656 lb.-ft. of torque, and this beauty gets you from 0 to 60 mph in 3.5 seconds and can complete a quarter-mile drag run in just 11.0 seconds.
That’s not the end of the story nowadays though, and that’s because we have another version of the 6.2 tuned to produce a near-ridiculous 797 hp and 707 lb.-ft. under the hood of the SRT Hellcat Redeye.

We could have made this a one-word sentence by just saying:  “Staggering.” But there’s actually a lot more subtlety to the Challenger’s performance than that. Despite what you might think, the Challenger is actually pretty adept at going around bends and corners and is, therefore, more than just a straight-line bully.

An entire book could be written about the different variants and how their tuning delivers different ride and handling characteristics. But it’s probably just best to say the Challenger is better to drive, in all its various forms, than non-believers might want you to think. And as for the outright performance? Well, it’s staggering.

Getting in and out of the back seats might not be as easy with the two-door Challenger as it is with the four-door Dodge Charger, but once you’re in there’s plenty of room. As we’ve said, this is a big car, and that means a big interior too. Even luggage is well catered for with a trunk that holds up to 16.2 cu.-ft.

As well as being spacious, the interior is dark, but also very comfortable. This isn’t some stripped-down performance interior by any means, and if you’re prepared to go up on the trim levels a little, the Challenger can actually look and feel quite luxurious. The cabin is even quiet. Except when the driver’s right foot decides otherwise, of course.

There’s a huge amount of choice when it comes to the features and equipment you can include in your 2019 Dodge Challenger, but there’s no such thing as a badly equipped model. Standard kit in the base SXT includes 18-inch alloys, a very good houndstooth cloth upholstery, power-adjustable front seats, a leather-wrapped steering wheel, dual-zone automatic climate control, and an excellent 7.0-inch touchscreen infotainment system that’s Apple CarPlay and Android Auto compatible.

If you like powerful cars and you like driving, it’s hard to think of a reason why you wouldn’t want to get behind the wheel of a 2019 Challenger. Okay, it doesn’t have some of the advanced technological trickery of a German or Japanese performance car, and even all the power it has on tap wouldn’t help it beat a BMW M4 around a twisty track. But this car has things those types of car don’t have much of, which is character, presence, and soul. This is the car your heart would buy, so listen to your heart. 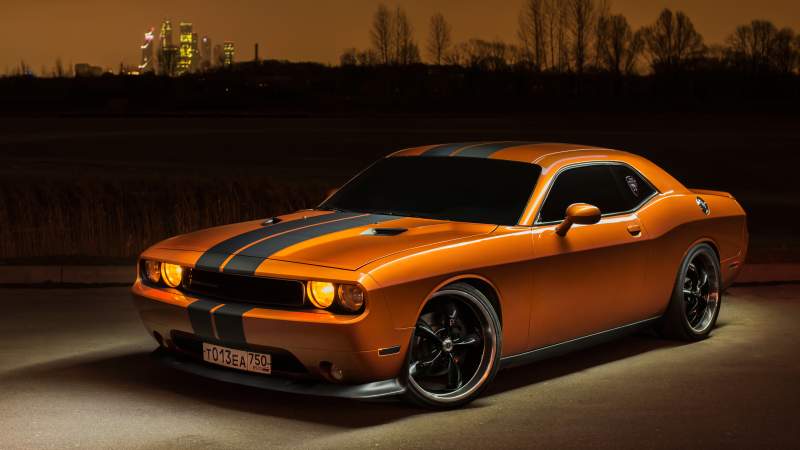