Inside The 2019 Audi TT, TTS and TTRS: A Thrilling Driving Experience

The 2019 Audi TT sees the little roadster and coupe celebrating its 20th anniversary. Despite it’s long lifespan, it’s still one of the most popular luxury models of its type on the roadsall around in the world. If the Volkswagen Beetle was going to have a sportier, more masculine and more serious sibling, the TT could be it.

The rounded styling of the TT has become less polarizing over time, and this current third-generation version of the little Audi has more straight lines on its front fascia than the original car had on its entire bodywork. The first-generation TT might have looked a little close to the VW Beetle, but those comparisons have  completely receded with the current TT. The rear end is still quite rounded, but the front is a lot closer to an A3 or A4 than it is to the original TT.

If you’ve always yearned for an Audi R8 but couldn’t afford or justify the money for an R8, the TT is now a very reasonable alternative. In fact, it isn’t unheard of to see some owners fitting black panels between the doors and rear wheels to make casual onlookers think they have an R8 instead of a TT.

There have been some tweaks to the styling to celebrate the anniversary, but you’d have to be a genuinely hardcore TT enthusiast to notice the changes. You may not agree, but some reviewers claim this is one of the few models available today in convertible and coupe body styles where the convertible isn’t the more attractive option.

It couldn’t really be much simpler when it comes to the models and trim levels in the TT family. The TT Coupe, TT Roadster, TTS, and the TTRS are all single trim level models. That’s right, there are no Premium or Premium Plus grades here at all, but there are the usual upgrade packages to help make your TT your own. Of course, there are some differences when it comes to powertrains.

The TTRS is all on its own here, by utilizing a 2.5-liter five-cylinder engine. The rest of the TT family come equipped with differently tuned 2.0-liter turbo four engines. The base engine is a 2.0-liter turbo-four that produces 228 horsepower and 258 lb.-ft. of torque, which sends its power to Audi’s quattro all-wheel-drive system through a six-speed dual-clutch automatic transmission. This might be the least powerful engine on offer, but it still gets the TT from 0 to 60 mph in just 5.3 seconds.

Hotter TTS models see their 2.0-liter turbo-four tuned to deliver 288 hp and 280 lb.-ft. of torque, and this helps the TTS get to 60 mph from a standing start in just 4.6 seconds. The TTS also comes standard with Audi’s magnetic ride suspension, which is hard to live without once you’ve experienced it. As well as aiding performance, it also makes the ride a lot more enjoyable than you’ll find with the standard car.

When we suggested in the intro that the TTRS might be a good idea, as it gets you fabulous performance for around $100k less than an R8, we weren’t messing around. The TTRS has a 2.5-liter five-cylinder turbo under its hood that puts out 400 hp and a 354 lb.-ft. of torque, and it propels this pocket-rocket to 60 mph in 3.7 seconds. To get the absolute most out of the T RS, you may well want to pay a little more to get the optional, but very effective, carbon ceramic brakes, active rear spoiler, and sport tires. After all, if you’re going that far, maybe reach just a little bit farther.

Technically, the TT Coupe does have rear seats, but it’s hard to think of what they’re going to be useful for, other than keeping a couple of grocery bags secure on the way home from the store. Even then, the best idea is to fold them down and then you actually get a very usable amount of cargo space you might not have been expecting. But this is not a family car, by any means.

Perhaps the main area of focus with the TT interior is the cockpit, which has to be one of the most driver-centric in the entire market. There’s plenty of headroom and legroom for the front seat passenger, but it’s the driver who really gets all the goodies. Everything is angled towards the driver, and every control is easily accessible. Some people might not like the fact the infotainment isn’t easily accessible by the passenger, but it’s not going to be a deal-breaker. This car, after all, was built with the driver solely in mind.

Unsurprisingly, the quality of build, materials, and styling of the TT’s cabin is beyond reproach, especially with the TTS and the TTRS.

For what’s essentially a sports car, the TT is pretty good on gas, although it does start to get a little thirsty with the high-performance TTRS. Coupe and Roadster models are rated by the EPA at 23 mpg in the city, 31 mpg on the highway and 26 mpg combined. The TTS sees those number drop slightly to 23/29/25 mpg. Although the TTRS wasn’t EPA tested, you can be assured its mileage will take a bit of a beating down from the TTS range.

The Audi TT is a car that will stand or fall with most potential buyers depending on how they feel about the way it looks. If you are happy with the exterior styling, which probably has much wider appeal than it used to have, you’ll absolutely love the TT once you get behind the wheel. One word of warning though: this really is one of those cars that just gets better and better the more you spend. It’s hard to believe the top end TTRS would be seen as the best value for money option in the TT family, but it could very well be the case here. 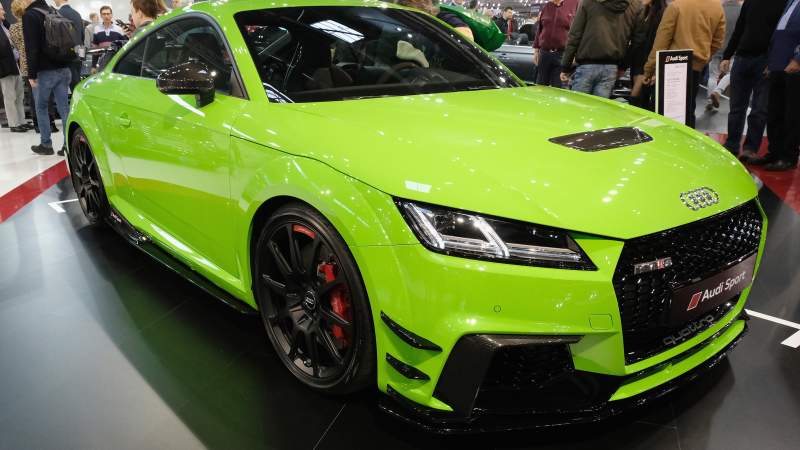