Inside the 2018 Mercedes-Benz C-Class

Mercedes-Benz has become the watchword for bleeding edge technology and luxury. If anything, Mercedes has strengthened its hold on the luxury car crown with the S-Class and E-Class, but it’s the C-Class that really matters.

This is the volume seller, the bread and butter for the company, and it’s a car that faces much stiffer competition. The compact premium sedan sector is a warzone right now and the 2018 Mercedes C-Class will have to be an absolute stunner if it is going to fend off its competitors, both foreign and domestic.

The Mercedes C-Class line-up is actually quite clean and simple compared to some others in its class. You can choose between a sedan, a wagon, a coupe, or a cabriolet, and there’s a choice of just three turbocharged engines, plus a token hybrid.

Mercedes has downsized and turbocharged its engines, as have so many others, in the name of emissions. The entry-level C300 is now powered by a turbocharged, two-liter inline-four cylinder, which pumps out a respectable 241 bhp and 273 lb/ft of torque. Sadly, it’s nowhere near the AMG C43 that relies on a three-liter twin turbo V6, which gives you 362 bhp and 384 lb/ft of torque to play with. Both come with a nine-speed automatic gearbox and you can choose the optional 4matic four-wheel-drive system.

The AMG C63 and range-topping C63 C are the muscle cars of the line-up. The C63 offers 469 bhp and 479 lb/ft of torque, while the C63 S has an epic 503 bhp and 516 lb/ft of torque at its disposal. The higher end cars are just too much for the nine-speed gearbox and settle for a more rugged seven-speed box.

That leaves the C350e, a hybrid that combines the two-liter inline-four turbo with an electric motor. It provides 275 bhp and 443 lb/ft of torque, and is focused more on performance than actually saving fuel.

Mercedes doesn’t really do different levels of trim, but you can also boost the price of your C-Class beyond all reason if you hit the options list hard and go for AMG parts. This, though, is nothing new in the premium sector.

Mercedes is a leader when it comes to safety and is famous for groundbreaking tech on the S-Class which then trickles down to the C-Class.

The C-Class has received a five-star NHTSA crash rating as it’s loaded with airbags and standard passive safety measures, including clever anti-whiplash head restraints that respond to an accident.

You get active adaptive cruise control and Lane Keeping Assist, which vibrates and then applies the brake if you stray too far off line. BAS Plus and PRE-SAFE are part of Intelligent drive, which uses a system of cameras and radars to spot hazards before they turn into dangers and stops the car if you don’t get there first. Attention Assist even keeps an eye on you to check for fatigue.

As for the infotainment, the C-Class is class-leading. The multimedia package includes voice control, in-car Wi-Fi hotspot, and a touchpad to complement the main 8.4” touchscreen. Apple CarPlay or Android Auto support, and a Burmester surround sound system are on the options list. The bargain basement Garmin navigation sticks out like a sore thumb, but it is the only flaw in an otherwise polished diamond.

Nobody does luxury better than Mercedes and the interior is second to none in this sector. It’s clean, it’s modern, and it’s perfectly appointed. The sedan even gets the moonroof as standard now, so you get a lighter, airier driving experience.

Mercedes-Benz has gone the tried and true route of engine downsizing and turbocharging to reduce emissions and improve fuel economy. This is more important in Europe, where fuel carries a heavy tax burden, but it’s becoming an increasingly hot topic in the U.S. as well.

As for the hybrid, it will only give you 28 mpg in the city and 32 mpg on the open road. So don’t expect any environmental miracles — this is no Prius. 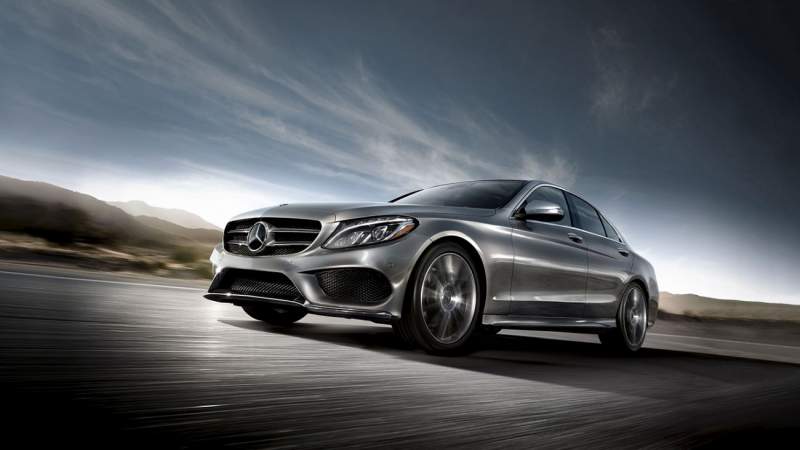 How It Stacks Up Against the Competition

This used to be a simple class as Mercedes only had to deal with Audi and BMW. Now the Jaguar XE, Cadillac ATS, Lexus IS, and even the new Alfa Romeo Giulia have forced their way into contention. Despite the stiff competition, Mercedes is still there at the top of the pile in a number of ways and close enough in the others to retain its crown.

In the luxury stakes, it is the best by far. Audi is closing the gap in terms of interior tech, but even Ingolstadt can’t hold a candle to the fit and finish of the C-Class.

The C-Class is an elegant, well-proportioned car with just the right amount of aggression, especially with the AMG add-ons. It is also a match for the best in the business when it comes to driving dynamics. One criticism is that the AMG sports suspension is a little too track-tuned and creates an overly firm drive — but that’s an option and you don’t have to take it.

Jaguar, Cadillac, and particularly Audi have closed the gap in recent years. But the Mercedes C-Class is still the benchmark in the compact luxury sector. In this exalted company, that’s a seriously impressive feat.