How These 2020 Luxury SUVs Stack Up Against Each Other

In this article, we breakdown and compare five of the bestselling luxury SUVs on the market today, looking at the 2020 models of the BMW X5, Porsche Cayenne, Mercedes-Benz GLE, Audi Q7, and Range Rover. If you are in the market for a new SUV in the near future, we will help you break down the pros of cons of each vehicles, breaking them down by a handful of key categories.

When it comes to price, there is a wide discrepancy among these luxury SUVs. Depending on your budget and appetite for extras, you can spend less than $55,000 for a basic Audi Q7 or Mercedes-Benz GLE, or $135,000 for a fully loaded top of the line Range Rover. In the middle are the top end BMW X5 for just over $75,000 and the loaded Porsche Cayenne for just under $125,000. Below are the prices for each vehicle ranked least expensive to most expensive, and showing the price range between the bottom and top end trims.

When talking about performance, we’re discussing how each vehicle drives and performs on city roads, highways, and even off-road. Here’s what the critics and reviewers are saying about each vehicle:

Audi Q7: There is plenty of power and torque in the Q7 thanks to its supercharged 3.0-liter V6 engine. The engine has been particularly lauded for providing a smooth and quiet ride. Braking and steering have also been praised for being appropriate and responsive. If there is one knock on the Q7 SUV, it’s that the handling is not as responsive at high speeds and it can have trouble hugging corners when driving on off-road surfaces.

Mercedes GLE: The base model four-cylinder engine has been criticized for being weak and most reviews urge buyers to upgrade to the more powerful V8 engine option. That said, the steering on the GLE has been called “precise” and the brakes have been singled out for being responsive. While sporty, most reviewers seem to agree that the Mercedes-Benz GLE is meant for city driving rather than tackling off-road terrain on a regular basis.

BMW X5: The overall view is that the latest iteration of the X5 handles more like a large sedan than an SUV. Praise has been heaped on the optional “Dynamic Handling” package that is meant to improve the vehicle’s handling capabilities off-road. While the standard turbocharged six-cylinder engine is viewed as adequate, most reviews recommend upgrading to the available V8 option.

Porsche Cayenne: Much love has been given to the Cayenne’s speed and power, as well as its grip around curves and corners. Reviewers also love the standard all-wheel drive and recommend keeping this SUV in the “sport” driving mode both in the city and country. However, this Porsche has received criticism for heavy steering and choppy brakes in what is meant to be a family SUV.

Range Rover: The Range Rover has impressed with both its diesel V6 and supercharged V8 engines, which, according to reviews, each ensure a smooth and quiet ride no matter what the locale. The acceleration, steering, and braking are all top notch. The only criticism of this SUVs performance appears to be with its weight and handling. At nearly 5,500 pounds, the Range Rover is a heavier SUV and drivers will likely feel that weight going around corners.

Here are the number of trimlines available for each SUV.

Audi Q7: Three available trimlines – the Komfort, Progressiv and Technik. The base model comes equipped with an older supercharged 3.0-liter V-6 engine, while the top end model comes with a more powerful V8 engine and a fully touch-sensitive interface with a dual screen layout.

Mercedes GLE: The GLE also comes with three trimlines, but they offer very little to distinguish them except for an upgraded engine. Each GLE trimline comes with the same MBUX Infotainment System and nearly identical safety features. The GLE offers the most bang for the buck at the base model trimline, though.

BMW X5: The BMW X5 is offered in five trim levels, and, depending on which one you choose, you could have a V6 or a V8 engine, or even a diesel engine. Higher trimlines also offer all-wheel drive, a wider range of exterior colors, and a few more technology features for people who love gadgets and gizmos.

Range Rover: Available in six trimlines. The most basic one, the SE, comes with Premium LED headlights and a leather interior with 14-way powered front seats. The top SVR trimline features the exclusive 5.0-litre V8 Supercharged engine with 575 horsepower.

Here is a comparison of the Environmental Protection Agency (EPA) fuel economy for each vehicle, expressed in miles per gallon for both city and highway driving.

While each SUV professes to have ample safety features, they all differ in terms of the features that come standard versus optional extras. Here is a comparison of the safety features you get with each vehicle and what safety functions are add-ons.

Audi Q7: As you would expect, Audi provides a suite of standard safety features in the Q7, including electronic stability control, traction control, and secondary collision brake assist. There is also an electromechanical parking brake, anti-lock braking system, and tire pressure monitoring system. Upgraded safety features include rear cross-traffic alert, a top view camera system that provides a 360-degree view of the vehicle, and a head-up display with navigation.

Mercedes GLE: With the GLE, Mercedes-Benz offers some unique, proprietary safety features. These include its PRESAFE system that can sense if a crash is imminent, detecting skidding for example, and then tightens the front seat belts, adjusts the head rests, and closes the windows and sunroof. Other safety features that come standard include blind spot assist and lane keeping assist. Other features such as rear cross-traffic warning are extra upgrades.

Porsche Cayenne: Standard safety features you can expect to find in the Porsche Cayenne include adaptive cruise control, lane keeping assist, night vision assist that uses a thermal imaging camera to help drivers see what’s happening beyond the range of the headlights, and brake assist. Additional safety functions that come as options include upgraded LED lights and traction control.

Each of these vehicles comes from a major automotive manufacturer and has an established track record that makes them reputable SUVs. That said, reviewers have had specific things to say about each vehicle’s reliability.

Audi Q7: Described as a “sensible” and “family-oriented” SUV, the Q7 has a reputation for being safe, reliable and well-equipped when it comes to advanced technology features. However, this vehicles’ reputation takes a hit for its general lack of space. Most reviewers tend to agree that competing SUVs provide a more usable and comfortable third-row seat, and many reviewers have urged Audi to ditch the third-row seating altogether in the Q7.

Mercedes GLE: Praised for being “refined,” the 2020 GLE has been redesigned and is earning a reputation for providing cutting edge technology and comfort to drivers and passengers. The MBUX infotainment system, in particular, has garnered high praise for its ease of use. However, this is a luxury SUV meant more for city driving and impressing neighbors and friends. It does not win top marks for its off-road capabilities.

BMW X5: Originally described as more of a station wagon than an SUV, reviewers seem to agree that the X5 has come a long way since it debuted back in 2000. The 2020 model has received positive notices for its size, cargo capacity, advanced tech features, and maneuverability. The X5 continues to receive top marks in the luxury SUV segment. Though the vehicle’s standard engine has been criticized for lacking power and speed. Go with the V8 engine option.

Porsche Cayenne: Redesigned a year ago, the 2020 Cayenne boasts a luxurious interior with all the tech bells and whistles. It scores high marks for its power, speed, and handling. The overall driving experience is hard to beat. Although the Cayenne’s cargo area has been improved, it still remains a bit smaller than comparable SUVs. Some reviewers have called out Porsche for the Cayenne’s expensive upgrades, which can really add up quick.

Range Rover: Called “one of the most versatile vehicles” on the road today, the Range Rover receives much love for being a true off-roader. Its standard four-wheel drive, configurable traction settings, and air suspension enable the Range Rover to easily tackle muddy trails and drive through water that’s three feet deep. However, the Range Rover has long been criticized for lacking many of the luxury options found in other SUVs in this category, notably when it comes to technology. The good news is that the 2020 model finally has Apple CarPlay and Android Auto included.

Each one of these luxury SUVs has its own set of pros and cons, whether it’s price, mileage, interior space, or just certain features that you want more than others, depending on your typical driving habits. One thing is for sure, though; they are all great vehicles and you’re not likely to be disappointed in any of them. If you’re in the market for a luxury brand SUV, do yourself a favor and add these five models to your Test Drive List. We think you’ll find your own personal favorite with relative ease. 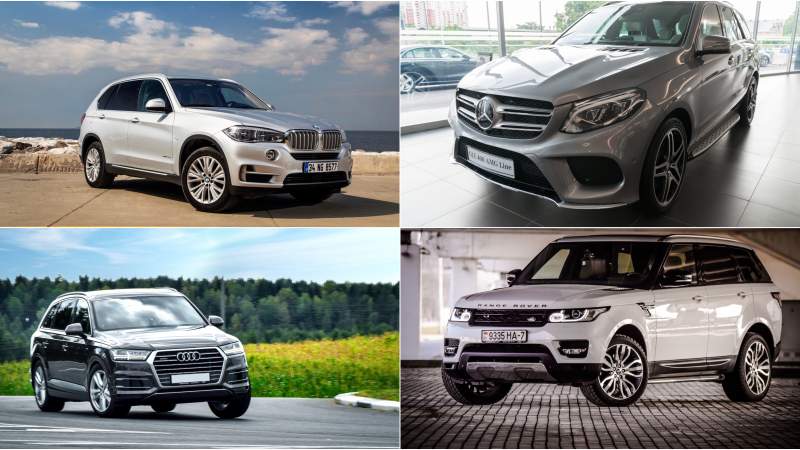