2019 Subaru Ascent: A Sturdy Choice for Large Families On the Go

The 2019 Subaru Ascent is a three-row large SUV sold only in North America, and it’s the biggest vehicle Subaru has ever produced. It might look an awful lot like a big Outback, but the Ascent is actually an entirely new model. It’s aimed at families on the go, especially those who could really do with a minivan but want something more rugged.

Here’s why the 2019 Subaru Ascent is the perfect vehicle for large families on the go in the town, the city, and perhaps occasionally, the wilderness.

If the starting point for a good family vehicle is a large interior with plenty of storage, the 2019 Subaru Ascent has its priorities right.The overall capacity is impressive, with seating for up to eight people and plenty of their stuff. Like most three-row SUVs, the third-row seats are best reserved for children, but with 31.7 inches of legroom, they’re usable for adults on short journeys.

Buyers won’t find any gimmicky minivan features in the back of the Ascent like a vacuum cleaner or rear-seat entertainment, but they will find a quality, durable interior with loads of storage solutions. It’s also as quiet as a whisper back there, so it really is a nice ride.

The exterior styling of the 2019 Subaru Ascent isn’t going to win many beauty contests or automotive design awards. But to be fair, the Ascent isn’t an unattractive or ugly vehicle by any means.

In the right trim level and with the right color and options, the Ascent can look great. Its design is definitely more of a tall wagon than a high-riding, aggressive, off-roader. One thing about the exterior design that’s for sure: nobody will mistake the Ascent for anything other than a Subaru.

Few buyers shopping for a large family vehicle will be looking for blistering performance, but as vehicles designed to carry a lot of people and a lot of stuff, they do need to have plenty of power to handle a full load of people and cargo. Some people still frown at the idea of a vehicle of this size utilizing a four-cylinder engine, but turbo-fours like the new engine in the Ascent are more powerful and more capable than the elderly V-6s they’re now replacing.

The unit under the hood of the Subaru Ascent is a 2.4-liter turbo-four that produces 260 horsepower and 277 lb.-ft. of torque. Like all Subarus, the Ascent is standard all-wheel-drive in all its forms, and the CVT we have here is about as good as this type of transmission gets.

Don’t write off continuously variable automatic transmissions entirely until you tried this one from Subaru. If the driver stamps on the throttle the CVT is designed to simulate the changes of an eight-speed automatic, and the simulation can also be summoned with the steering wheel-mounted paddle shifters. Zero to 60 mph might not be rocket-ship fast, but it’s not bad for a vehicle of this size and weight with a four-cylinder under its hood.

When most of us think about Subaru we think about all-wheel-drive, but not necessarily the kind of capability for driving up remote mountain trails. The single system in the 2019 Ascent is electronically controlled, and it sends the power to where it’s needed most between the front or all four wheels, depending on the availability of grip.

There’s an “X-Mode” that actually simulates low-range gearing for going off-road, there’s hill-descent control for challenging ascents (no pun intended), and the Subaru boasts the same ground clearance as a Jeep Grand Cherokee. It doesn’t make the Ascent a hard-core off-roader by any means, but the system does deliver more capability than a lot of crossover rivals.

Family vehicles need to be safe vehicles, and there’s a long list of standard and available safety features on the 2019 Subaru Ascent. But it’s much quicker and easier to understand how safe this vehicle is by pointing out that the NHTSA gives it a full five-star rating for overall safety and the IIHS gives it the coveted Top Safety Pick+ rating. It really doesn’t get better than that.

The top Touring trim level gets leather throughout the cabin, 20-inch alloy wheels, a forward-facing camera, a panoramic moonroof, heated and cooled front seats, heated second-row seats and woodgrain trim. However, the Touring costs around $13k more than the base trim, so you really have to want those extras to pay so much more.

If you’re prepared to stray away from the usual suspects in the three-row family SUV segment, the 2019 Subaru Ascent makes a compelling argument for itself, especially in the base or Premium trims. It does everything you’d expect from this type of vehicle, and there are no real drawbacks to speak of. It might not have the prettiest or the most exciting of exteriors, but it’ll be relatively easy to locate in a packed parking lot. It’s hard to think of any rival that it does its job better than the Ascent. 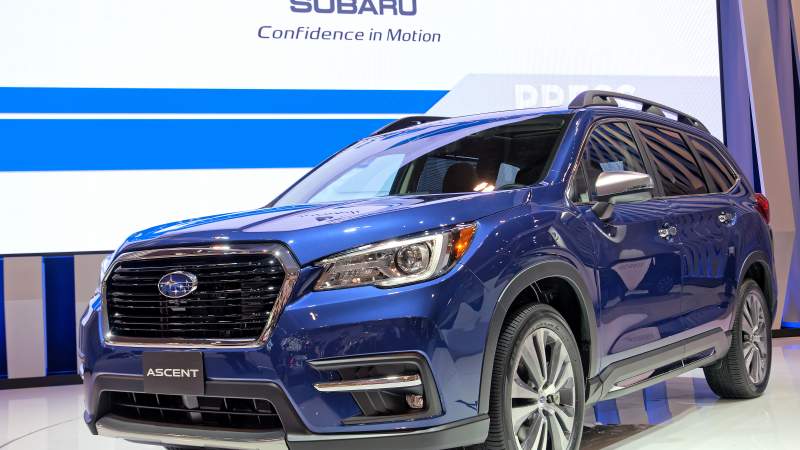