Right now, SUVs are the most popular vehicle on the road. But not all SUVs are created equal – some are car-like crossovers while others are old-school, truck-based, ladder-frame SUVs. And if you’re looking for a traditional SUV that can do it all, you need to consider the 2019 Chevrolet Tahoe.

The 2019 Chevy Tahoe is an SUV with a legacy, but it’s been updated to fit in with features and design changes for the modern driver. Let’s take a closer look to see why it’s an SUV worth test driving.

When it comes to deciding between crossovers and truck-based SUVs, capability is an area where there are stark differences. While there are some large crossovers out there that are decent for towing, they’re not really in the same class as the Tahoe. A

For the Tahoe, towing is no problem. When properly specified with the Max Trailering Package, it can tow up to 8,600 pounds. And even the lowest trailer rating for the Chevy is an impressive 6,600 pounds. Add into the equation the fact the mighty Chevy can accommodate up to nine people and is capable off-road too, and it becomes apparent there’s a big place for a vehicle like this on today’s roads.

A big vehicle with big things to do inevitably needs a big engine, and there are two of them in the 2019 Chevy Tahoe family. The standard powerplant and the one you’re likely to come across most is a 5.3-liter V-8 that puts out a more than useful 355 horsepower and 383 lb.-ft. of torque. Its six-speed automatic transmission works beautifully with the powerful V-8 to deliver a smooth, comfortable and effortless ride.

What is very 2019 about the 5.3-liter V-8 is its ability to run on just half of its cylinders in low-load circumstances to deliver reasonably impressive fuel economy for a vehicle of this size, weight, and capability.

Range-topping Premier variants of the 2019 Tahoe can be had with an even more powerful 6.2-liter V-8, which then puts 420 hp and 460 lb.-ft. of torque at the Chevy’s disposal. Going for this combination also opens up the option of a 10-speed Hydra-Matic automatic transmission for the Tahoe.

You’re not going to be leaving a Jeep Wrangler or a Land Rover Defender struggling behind you on a tough mountain trail in a Tahoe, but when it’s correctly specified with the Z71 Off-Road Package, the Tahoe can be impressive in such circumstances for such a big vehicle.

If hard-core off-roading is what you have planned a lot of the time for your new vehicle, the Tahoe might not be your number one choice. But If you want an incredibly capable and versatile vehicle that can more than take care of itself when the tarmac runs out, this Chevy is a serious contender.

While there are only three trim levels in the 2019 Chevy Tahoe lineup, there’s still plenty of choice for buyers to get the right vehicle for them. Buyers can choose from 10 different exterior colors, nine interiors, and 12 different wheel designs.

On top of that, buyers also get to choose from a number of upgrade packages to tailor the Tahoe to their specific needs. As well as the Z71 Off-Road Package for the LT trim level we’ve already mentioned, buyers can also choose from the Custom Edition, All-Season Package and the Enhanced Driver Alert Packages for the entry-level Tahoe LS. There’s also a Luxury Package, Texas Edition Package and a Luxury Package for the LT.

The seating options for the Tahoe are equally abundant. The maximum nine-seat configuration is more than most minivans can boast, but the Tahoe can also be specified as a seven-seat, or even a five-seat model by selecting the Custom Package for the LS trim level.

It’s a bit of a mixed bag when it comes to the Tahoe’s safety features. If it’s compared closely to one of the latest crossovers, the big Chevy might come up a little short as far as standard and available safety technology are concerned. However, the sheer size and bulk of the Tahoe mean it’s going to offer plenty of protection to its occupants in the event of a collision.

All models get seven airbags, ABS brakes and stability control, and LT and Premier trim levels come standard with a suite of active safety features that are also available as a cost option for the base LS. The available Collision Avoidance Package then adds features like automatic emergency braking, active lane control, automatic high-beams, and power-adjustable pedals.

LT models then add features such as leather upholstery, heated front seats and a premium Bose audio system. However, things like keyless entry and push-button start that are standard on other models require the addition of the Luxury Package here in the Tahoe LT.

A fully-loaded Tahoe Premier gets you things like cooled seats, navigation, magnetic dampers, and wood-effect interior trim, and it does a convincing impression of a large luxury SUV with just about everything other than a luxury badge.

Unless you’re looking for something small and spritely for nipping around the city, there isn’t much the 2019 Chevy Tahoe can’t do. In its range-topping Premier trim, it can exceed $75,000 at the top level, but that’s still considerably less than it would cost for a vehicle of similar capability that comes with prestige branding. 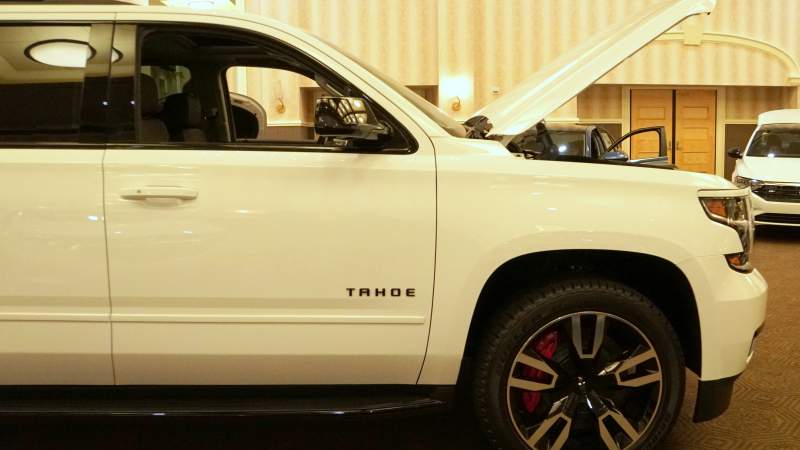